When I posted The Bright Young Things, I always thought I’d want to write about what came after the Roaring Twenties. We humans like to think of decades as clearly defining cultural or political phenomena, but real life is rarely that clear-cut.

The Roaring Twenties really ended in 1929 with the infamous Wall Street crash. From a cultural point of view, the reaction to the economic downturn is really interesting. People demanded escapism and the result was the rise of glitzy Hollywood musicals (made possible with the invention of “the talkie” in 1927). This Busby Berkeley number from 1933 is incredible: economic woes, American values, risky outfits, imaginative choreography, and an adorable Ginger Rodgers.

I love the contrast between the glitz of Busby Berkeley musicals and the British equivalent. The Gracie Fields musical, Sing as We Go, was written by novelist J.B. Priestley and was the story of a young girl laid off from her work in a mill who decides to go to Blackpool in pursuit of her dreams. Pay attention to Gracie’s wonderful jumper in this excerpt!

The two clips make for good companion pieces because they tell the same stories in two different settings. the world was a darker, more uncertain place and people faced real hardship as they were trying to ‘make it’.

Fashion was more grown-up as well. The boyish silhouette of the 1920s gave way to a feminine, more fitted look with a high waist and puff sleeves. The young, carefree girl had grown into a hard-working, smart woman and fashion trends reflected that. Tailored ensembles, mid-calf skirts, and form-fitted blouses with detailed neck-lines were all staple wardrobe items. The 1930s also became one of the most exciting ages in which to be a knitter. Jumpers were hugely fashionable and knitting became a way of making fashionable clothes for yourself on a small budget. You can read more about 1930s knitted jumpers in A Stitch in Time, vol. 1! Some of the most cutting edge designs in the book are indeed from the 1930s. Just look at The Rose Jumper with its dramatic neckline and beautiful sleeves coming to points immediately above the cuff. 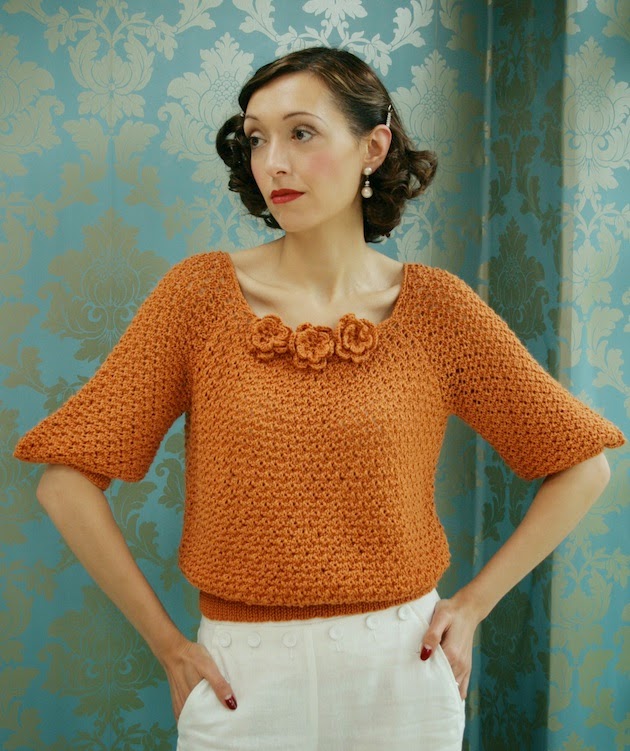 The most dramatic piece of all has to be Concentrate on the Sleeves with its ‘sharks fin’ pleats at the top of each, already dramatic, leg o’ mutton sleeves. 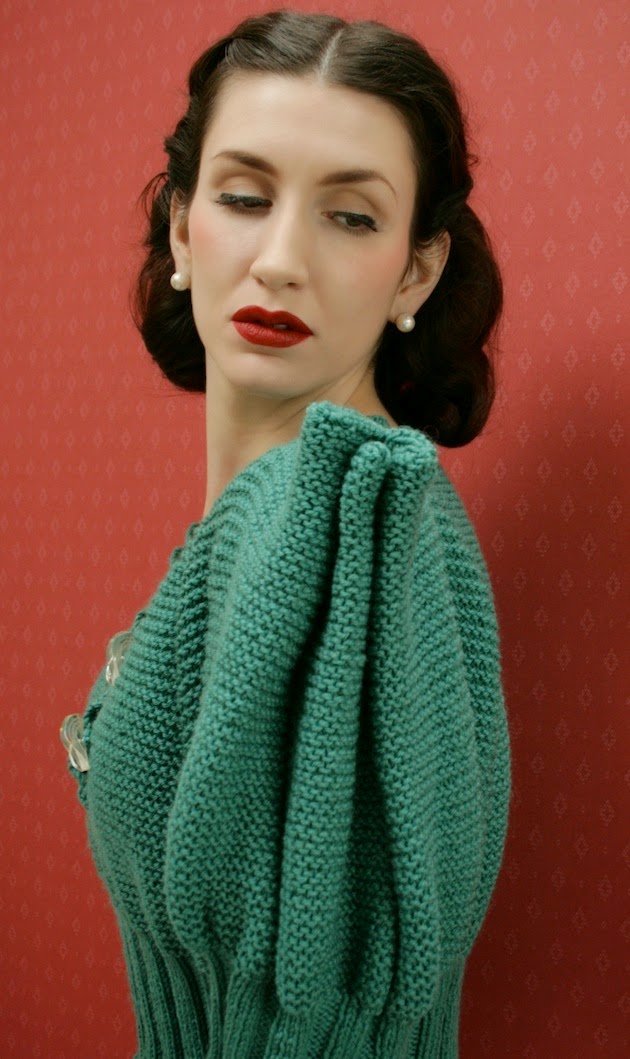 One of the things I love most about the 1930s is the music. As per usual Hollywood took advantage of new technology and as a result they made many splendid musicals while radio and gramophones made stars of touring “dance band” orchestras. Many “standards” started life as big popular hits in the 1930s: I Got Rhythm (written by George & Ira Gershwin), Cheek to Cheek (written by Irving Berlin), and Begin the Beguine (written by Cole Porter) among others. You also saw the rise of crooners like Bing Crosby (Pennies from Heaven) and a very young Frank Sinatra (Night & Day).

What about literature though? Writers like John Steinbeck, George Orwell, and Ernest Hemingway wrote angry, realist pieces about every-day life, but again you see a lot of escapism. The 1930s were the Golden Age of detective novels with writers like Agatha Christie (whose Miss Marple series started in 1930), Dorothy L. Sayers, and Ngaio Marsh. All wrote genteel mysteries featuring nice and definitely not so nice, middle-class and upper-class people. What better way to assuage the trials of toils of every-day life than curl up a good mystery where the villains eventually are brought to justice? Likewise, it is no coincidence that science-fiction and fantasy began to take off (J.R.R. Tolkien’s The Hobbit, T.H. White’s The Sword in the Stone, and Aldous Huxley’s Brave New World were all published in the 1930s) nor that the biggest literary success of the decade was Margaret Mitchell’s Gone With The Wind!

Nowadays I think we tend to forget the 1930s a little bit because it was the decade between the Roaring Twenties and the devastation of World War Two. I think it is a fascinating period of time filled with strong women, interesting books, and the start of mass pop culture.

Did I forget your favourite piece of 1930s culture?