Well what a week! I don’t think I’ve ever experienced a week of such incredible highs but also such terrible lows.

At 8am last Thursday morning my crowd funding appeal for the Vintage Shetland Project launched on pubslush. I wasn’t sure what to expect and really didn’t anticipate what followed over the subsequent 48 hours. The whole online knitting world seemed to join in tweeting and retweeting about the campaign. Facebook and instagram also went crazy. And unbelievably within those 48 hours I reached my initial target of £12,000. As I wrote in my previous blog post I have been completely overwhelmed by the response and support the knitting community has given me and the project and I am incredibly grateful. There are still a further 21 days of the campaign remaining with some fabulous folk involved in the blog tour so do please keep following the tour as they each reveal more of the pieces being featured in the book. And look out for a special treat on Friday afternoon! As I type, I have actually just had my 400th supporter. I really can’t thank you all enough.
On Sunday night we finally had the right combination of weather and availability to get our sheep sheared. This was the moment I had been waiting for since we first brought our first Shetlands to the farm. Amongst our 25 sheep we had 15 shearlings so their fleeces would be the best they were ever going to be. The Shetlands were actually surprisingly well behaved but our four Zwartbles freed of their enormous winter fleeces felt the need to run and jump and play and generally misbehave. Several hours later we had the compensation of 5 beautiful sacks of freshly sheared fleece in front of us.
I then had a marvellous time on Monday morning, recording a podcast interview with the fabulous Jo of Shiny Bees – a fellow northern lass. We had a great time waxing nostalgically about the night clubs of our youth and then got on to the serious business of questions and answers. I’m not normally very comfortable being interviewed – as I’ve probably mentioned before I’m convinced I sound like Cilla Black – but Jo put me completely at ease and in the end we conversed for over an hour. Just click on the link below if you fancy a listen. I’m reliably informed I’m more Paul O’Grady than Cilla Black!!

And then the unthinkable happened. From outside the farmhouse we heard an enormous bang and Gavin and I both rushed to the kitchen where the sound seemed to be coming from. As we looked through the windows we could see nothing but dense, grey smoke, blocking out everything in the farm yard below. As we struggled to make sense of what had happened we suddenly spotted flames shooting out of the corrugated barn at the end of the yard. Aware that the barn contained hay I ran immediately to the telephone and rang the emergancy services. Gavin went out through our front door to avoid approaching the flames head on to see if he could observe things better. When I joined him the blaze seemed to be getting worse as smoke and flame forced their way through the barn roof. 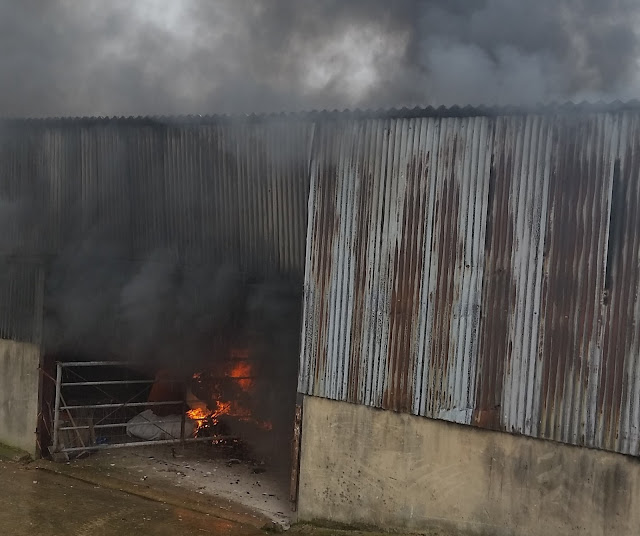 As the plumes went higher we could see further into the barn and we slowly realised that a quad bike garaged temporarily in the barn was ablaze. Only a scant couple of feet away were my sacks of fleece, the sacks themselves now alight. Gavin considered trying to rescue the sacks but the heat was so intense and the flames so fierce that he would have put his life at risk going any nearer. 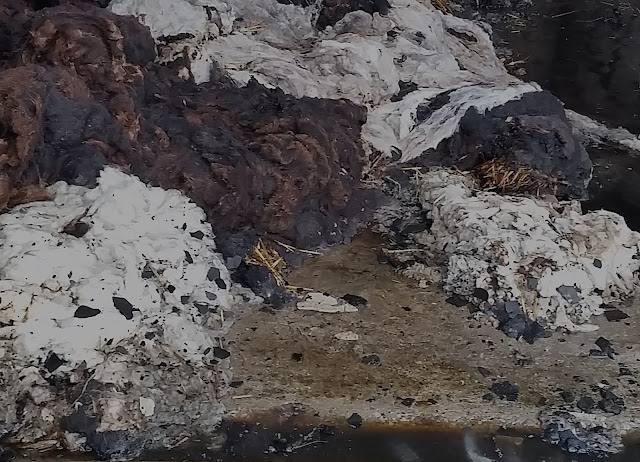 The fire brigade arrived in under 15 minutes and within a couple more were at work fighting the blaze. After what seemed like an eternity but in reality was probably more like 45 minutes the firemen began to reel in the hoses. The fire was out. Another fireman took thermal image readings, surveyed the damage, asked some questions and advised us that the quad bike had exploded and caused the fire. The barn roof was burnt through, the electrics melted, the quad bike nothing more than a metal shell and my precious fleeces were in a sodden, felted heap on the floor encrusted with melted plastic. I was distraught. But slowly realisation began to dawn on me. Only the night before me, Gavin and 25 sheep had all been inside the barn alongside the quad bike. And earlier that day we had again been in there sorting out the fleece. We had actually been very, very lucky.
Today I received a message from a dear friend and expert spinner who is going to try and create some yarn from the remnants of my fleece. If we even get just one skein out of it, what a very special skein it will be and a reminder of just how fortunate we were on such a dreadful day.
Feeling incredibly grateful for everything right now,
Susan xx