For many years Gavin and I have been visiting the Cumbrian seaside town of Grange over Sands. But on this particular day we travelled to Grange to follow the path to Hampsfell Hospice. 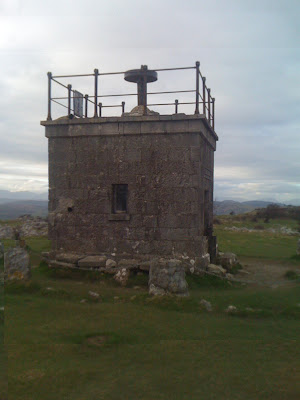 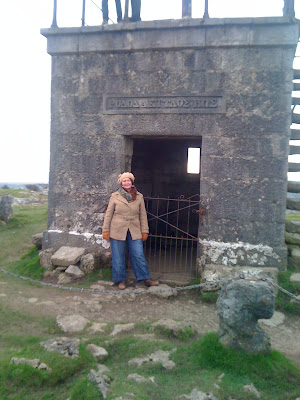 Built in 1846 by the vicar of Cartmel, it has served as a shelter for travellers since this time. The stone structure is built high on a hill overlooking south Cumbria. Inside are 3 stone seats, 3 windows and a fire place. 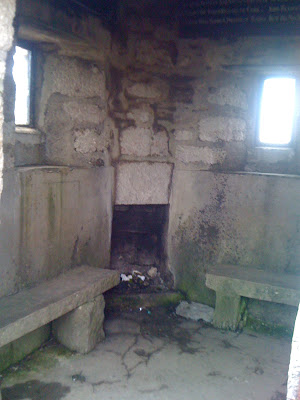 A perfect place for a weary traveller to rest for the night, protected from the high winds and other inclement weather conditions rushing up from the Irish Sea or down from the North Lakes and the Scottish Borders. Inside the building are messages to travellers on each of the four walls.

This first notice politely asks visitors to respect the property but actually states that it is not expected that people will do so – and this in 1846.

I coudn’t get a good shot of the next sign in the confined space but it basically describes and explains the purpose of the hospice:

“This Hospice as an open door,
A like to welcome rich and poor;
a roomy seat for young and old,
where they may screen them from the cold.
Three windows that command a view
to North, to West and Southward too;
a flight of steps requireth care,
the roof will show a prospect rare.
Mountain and vale you thence survey
the winding streams and noble Bay,
the sun at noon the shadow hides,
along the East and Western sides.
A lengthened chain holds guard around,
to keep the cattle from the ground;
kind reader freely take your pleasure,
but do no mischief to my Treasure.”

There are no longer any cattle on the hill, but the chain remains keeping the plentiful sheep from wandering in. The building itself is in remarkably good health with no apparent malicious damage having befallen it.

If it wasn’t for the Hospice this would be a very barren, lonely place to find yourself on a cold, wet night. What trees there are grow at a very strange angle, permanently bent from the fierce winds.

During the day though the view is spectacular. The clever vicar had precarious steps built up the outside of the Hospice and a viewing platform added to the top of the building.

On the viewing platform is a huge compass with various degrees marked around its circumference.

These degrees match up with a board detailing a list of places which can be seen from the platform.

This affords panoramic views from Snowdonia, across the Irish Sea to Lancashire and the Pennines, then mountainous North Cumbria then to the coastal areas around Barrow. It is a truly amazing sight.