As many of you may know it is the month of Wovember and my lovely friends Felix and Tom (best known on this blog as lace knitter extra-ordinaire) are presenting a month long celebration of wool, its manufacture, its use. I am painfully behind with my blogging so lets pretend its November 1st and I’m setting the scene for my involvement in Wovember by introducing an interview I did this time last year with Felix all about Excelana and just what is so special about it:

Felix: Could you say a little about some of the vintage yarns you encountered while researching your book? What, for you, makes them different from many commercially-spun yarns spun today?
Me: Many of the yarns were somewhat coarser than the average commercially-spun yarns we find in shops today, but with that comes longevity – hardwearing, long lasting items could be made from these yarns that lasted many years and could be easily darned to continue even longer or unravelled to be knitted again. There were more finer ply yarns than thick with 2 and 3 ply probably being the most common, although in the 1930s there was a surprisingly wide range of yarns available – even ‘Miss England Knitting Wool for Bathing Wear’ which included self-colours, marls and also space-dyed effects! 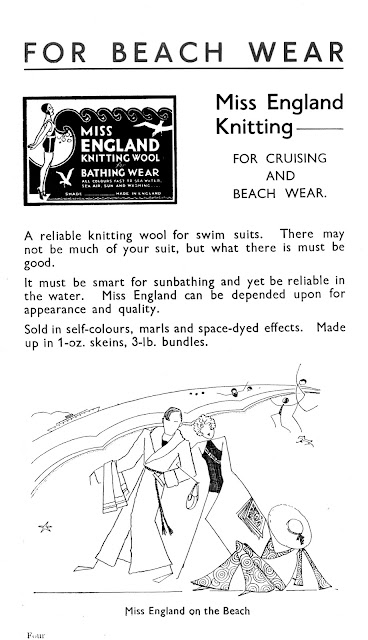 Felix: What, for you, are the distinctive characteristics of a good vintage yarn?
Me: Stretch, recovery, definition, strength, body, warmth.
Felix:  How did you begin to develop Excelana? What was the process?
Me: John had been experimenting with the Exmoor fleece for some time, and discussed with me the possibility of working together to develop the fibre into a commercially viable knitting yarn, rather than it continuing to be used in generic British wool carpet production, as it was usually overlooked for knitting yarn production.
I was initially sent samples of the undyed yarn. It had been spun but was not conditioned so had a different feel to the final product. However when I first began sampling we found that the fibres were still a little short overall producing a slightly uneven finish. It was at this point that John decided to combine it with 30% Bluefaced Leicester. This gave the yarn a longer staple and made it a more stable yarn for hand knitting.
Once the composition was decided upon it was then my job to choose colours and name them. I went through many old pattern books, shade cards and promotional leaflets to pick names that reflected those that I found but hopefully, without exactly replicating them. ‘Powdered Egg’ has proved to be the name that everyone notices. The dyeing stage followed and we nervously waited to see how well the yarn took colour. I wanted strong, solid colours that echoed the colours I had seen in the old shade cards and balls of yarn that I had studied, but until it came back from the dyers we had no idea how successful this process would be. In the end we had nothing to worry about as the yarn takes colour superbly and the colours matched the various swatches I had sent to the dyer perfectly. 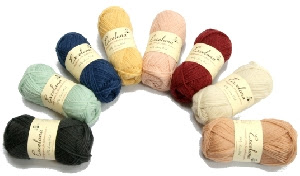