I’m incredibly excited to reveal the latest design in the Knits for a Cold Climate Collection.
Clemmie has been designed and created by my new design team collaborator here at Susan Crawford Vintage HQ, the incredibly talented Tess Young. Tess has a number of self published designs available and has also previously designed for Quince & Co., with a design aesthetic that combines a love of vintage with a vast knowledge of knitting techniques and an instinctive understanding of fabric, drape and structure. When we first discussed design ideas together,  I just knew she would design something very special with Fenella, and she has. Let me now pass you over to Tess, who will tell you more about her inspiration and the design process in creating Clemmie.

The Clemmie drape is my first pattern for the Knits for a Cold Climate individual pattern collection under the Susan Crawford Vintage label. Clemmie is the third pattern in the collection, inspired by Nancy Mitford, her novels, her life and her family. Nancy was one of the original “Bright Young Things” – a group of decadent and bohemian socialites roaming the party scene in interwar London – and she used these experiences in her books. You can see the two other patterns already released, Nancyherself and Asthall.
It’s been difficult keeping this exciting collaboration with Susan and Karie Westermann under wraps. I’ve so enjoyed working to Susan’s design brief, but it has been a challenge to reign in the inspiration this period provides for lovers of vintage fashion and knitwear.
When Susan and I first started discussing a design collection to include her new Fenellayarn I was immediately drawn to the 1930s, a period when much knitwear called for 3 ply yarns, but also characterised by elegant glamour, a little more restrained than the 20s, but perhaps more sensuous for it. This period saw the return of the waistline and accessories of the period, including capelets, shrugs and boleros, would stop just below the fullest point of the bust to emphasise the natural waist and hips. This can be seen in this illustration for Germaine Page hats, which also features the drape that was my original inspiration for Clemmie. 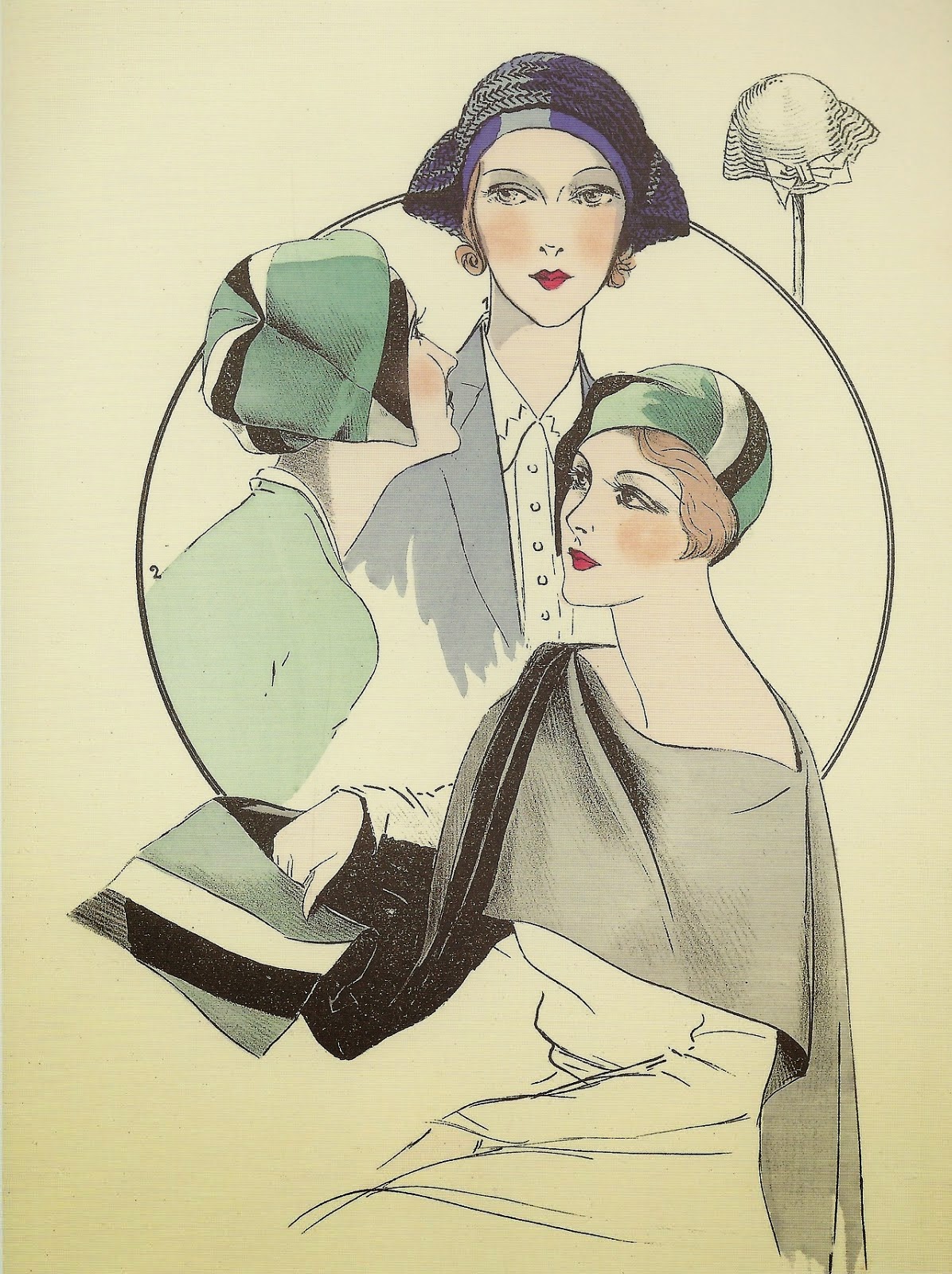 The period was also characterised by details and designs that broadened the shoulders, again to offset the waist, and emphasised necklines. The use of bows, interchangeable collars, corsages and panel details were all key elements of garment design. 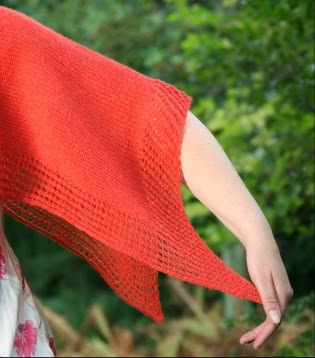 The lace edging detail on Clemmie was inspired by a garment that features these elements so redolent of 1930s design and which is my favourite vintage piece; a crepe de chine dress, cut on the bias and constructed to hug the waistline and hips, with panel inserts in the skirt to make it float at the hem. 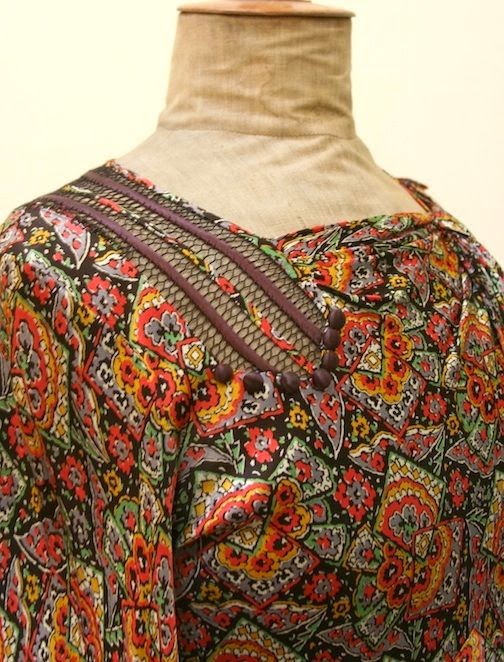 The panels of exquisitely hand sewn mesh, satin inserts and satin covered buttons at the neckline of the dress informed my choice of the simple mesh lace edging for Clemmie. 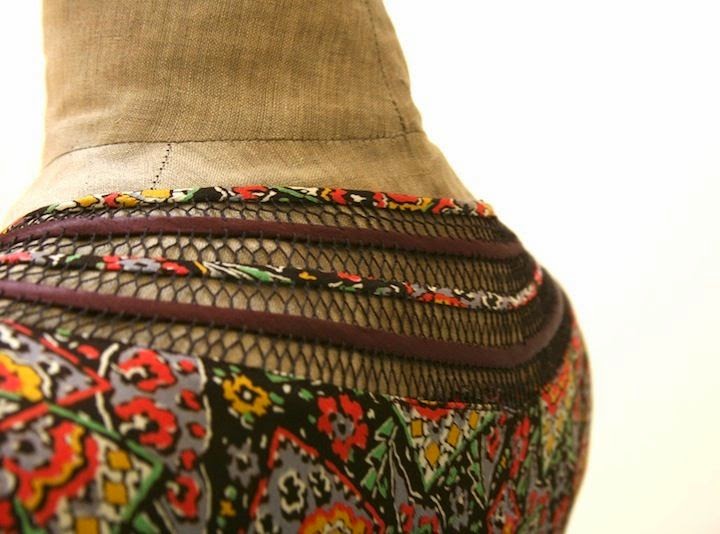 Knitted on 4mm needles, the Fenella creates a fine open fabric with wonderful drape which makes it an elegant finishing touch for formal wear but, as our model remarked, is surprisingly warm making it also ideally suited as elegant outer wear. 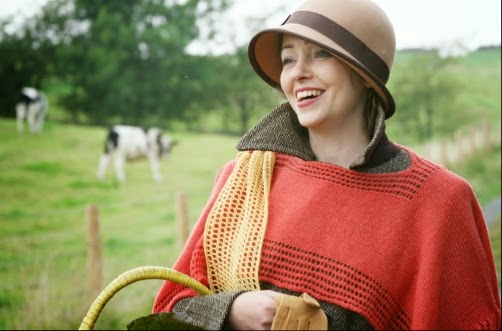 The Details:
You can buy the PDF Clemmie pattern from the Susan Crawford shop here
OR
You can buy the pattern from Ravelry here. (You do not need to be a member of ravelry to make a purchase from the site.)
The PDF pattern costs £3
You can also purchase or take a look at all the possible colour combinations of Fenella on the shop
here
Materials Required:
Option 1(as shown)
Main body – 5 skeins of Fenella 2 ply wool (shown in Atomic Red and Columbine)
Contrast drape – 1 skein of Fenella 2 ply wool (shown in Roman Plaster, Jonquil and Marriner)
Option 2
Main body worked in 2 colours with all lace edgings in contrast colour and drape worked in main colour;
Main colour – 4 skeins of Fenella 2 ply wool
Contrast colour – 3 skein of Fenella 2 ply wool
1 pair of 4mm needles
Stitch markers
Stitch holder
Fenella retails at only £4 a skein making Clemmie an extremely cost effective project.
And why Clemmie?
The original Clementine was the grandmother of the Mitford sisters. She married Algernon Bertram Mitford, a diplomat who had travelled in Russia, China and most notably Japan, about which he authored Tales of Old Japan, before serving under Benjamin Disraeli in the British government.
Clementine and Algernon were also patrons of the artist James Whistler, whose interest in Japanese art they shared and who painted portraits of both Clementine, ‘in draperies of Chinese blue silk’ and Algernon ‘in Van Dyke costume’. Unfortunately both paintings are believed to have been destroyed by Whistler to avoid them falling into the hands of his creditors.
Clementine and Algernon as Lady and Lord, then Baron Redesdale spent summers at Batsford Park, where their grandchildren visited them in the summer. On the death of her husband, in 1916, not long after that of their eldest son who died on the Western Front a year earlier, the title and Batsford Park passed to David Mitford, father of the Mitford sisters, who moved in with his family briefly before selling it and moving to Asthall. Clementine moved to Redesdale Cottage, the family’s country home in Tynedale where they had extensive land holdings. She stayed there taking an active part in community life until her death in 1932.
The second Clementine was the daughter of Clementine and Algernon’s eldest son, Clement. She was born after her father died in the Battle of Loos in 1915. It’s said that her childhood was as the ‘relatively’ poor relation once the inheritance went to her father’s younger brother, but she married well aged 23 in 1939, having been proposed to by Alfred Beit under the family’s Goya. Beit was a conservative MP and heir to the wealth accumulated by his father, a South African diamond millionaire and a considerable collection of paintings now housed in the National Gallery of Ireland.
Whilst a child Clementine’s mother spent periods abroad with her second husband and Clementine spent much of this time with her cousins. She was regarded as a great beauty, and cousin Nancy described Clementine as one of London’s 10 most elegant women.
During the Second World War Beit served in Bomber Command and Clementineworked in a factory making air reconnaissance cameras and became a member of the Transport Workers’ Union. After the war they went to South Africa and planned to stay, but returned in 1952, reportedly due to their opposition to the National Party’s apartheid regime. On return they moved to Russborough House near Dublin. Their art collection made them target of burglaries at Russborough House in the 1970s and 1980s.
Here is Clementine with her grandmother Clementine, the Dowager Lady Airlie (having reverted to her own title when her daughter in law inherited the title Lady Redesdale on the death of her husband) 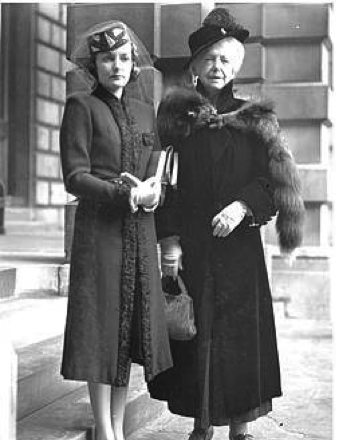 The third Clementine, was another ‘cousin’ Clemmie, the daughter of grandmother Clementine’s sister Blanche, and Lord Henry Hozier. However, due to her mother’s infidelities, her paternity is disputed with one of the candidates Aunt Clementine’s husband, Algernon.
Again, regarded as a great beauty this Clemmie married Winston Churchill in 1908 and the Mitford girls spent time with them at Chartwell when growing up, although Diana and Tom Mitford, the lone brother among the sisters, visited most regularly as playmates for the Churchill’s children, Diana and Randolph. 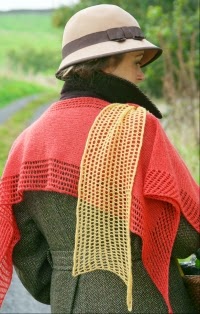 Clemmie made her début at Yarndale along with Asthall and it was wonderful to see the response from knitters after quite a long gestation period. Thank you to everyone who stopped, looked, purchased and indeed, even stroked her. Pattern pre-orders have now been dispatched so if she’s not with you yet, she will be very shortly.
Me:
Thank you Tess for creating such a beautiful design and for loving Fenella as much as I do, and thank you also to our fabulous model, Zunya, who bravely agreed to model for me despite having no previous modelling experience, and for entering into the spirit of the shoot with such gusto and providing us with such amazing images.
for now,
Susan xx