“Why do you wear a hat?” What you really should be asking is “why are you not?” *
I have always worn hats even in the dark days of the 1980s, when as a teenager I was laughed at for doing so. When my daughter was born in 1992 I engulfed her wardrobe with hats, both for play and dressing up and for ‘real-time’ use. Throughout her teens, hats have been once more, a fashionable item, and she has been able to wear her many, many hats without being ridiculed. To quote my hero, Stephen Jones, “Hats are the important accessory. ..when worn with verve, they are often the raison d’etre of many an outfit”. I believe hats complete an outfit and create a frame to a face, adding something that isn’t there without it. Imagine Marlene Dietrich here in ‘Witness for the Prosecution’ (1957) without her trademark beret. 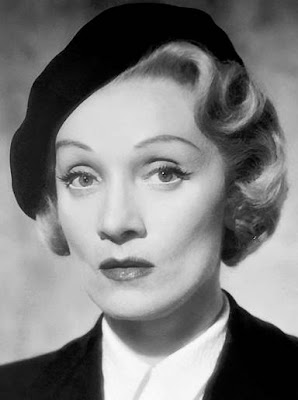 Or Audrey Hepburn as Holly Golightly in ‘My Fair Lady’ going to the races without one of the most famous hats in fashion history. 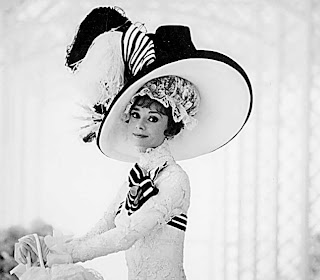 If I was asked to name three of my favourite hat designers, I would undoubtedly choose Stephen Jones, Cecil Beaton (because of My Fair Lady) and Woolly Wormhead. Woolly is without doubt a milliner in the truest sense of the word using knit fabric as her medium of choice to represent her constant stream of ideas. Like Stephen Jones, Woolly has been inspired heavily by natural forms and architecture but for her latest collection, Classic Woolly Toppers, has delved into classic hat shapes and styles, re-interpreting them in her own inimitable way and updating them for the ‘modern’ knitter. I am truly inspired by the way Woolly has looked at established hat styles and found a way of putting her own unique stamp on these and creating a contemporary, forward-looking collection.
Classic Woolly Toppers contains 10 fabulous hat designs perfect for all different face shapes and hair lengths. In fact, Woolly provides some very useful advice on picking the right hat. The patterns are clear and as always with Woolly, well written and carefully thought out. And to top all of that, my daughter the hat-wearer is on the front cover!
In this photo she is wearing the Camden Cap which shows how effectively Woolly has interpreted well-beloved hat shapes.
My favourite of the ten designs however is Ravine.
Closely reflecting the cloche hats of the 1920s, this hat sculpts itself to the crown of the head and frames the eyes and mouth of the wearer. It instantly made me think of the helmets worn in Fritz Lang’s ‘Metropolis’

and also of these crocheted cloches from a ‘Woman and Home’ magazine from 1930. 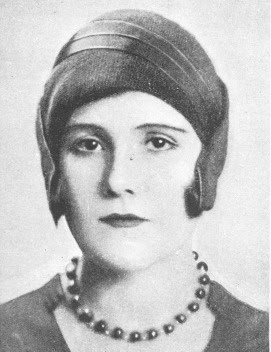 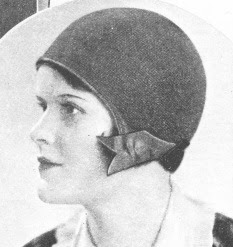 I really wanted to see how Woolly’s hat would look with a bit of vintage styling (and I wanted an excuse to make myself Ravine!) so I decided to knit the hat for myself. I used two balls of Excelana DK in Saharan Sand to go with my classic tweed coat and worked the hat exactly as specified for the fifth size in the pattern, which is for a 22 inch head circumference. I probably should have reduced the depth of the hat by about 4 rows to get an absolutely perfect fit but I wanted to see how my head shape compared with the pattern so I would know how to adjust in the future. If I had reduced the length by 4 rows I would actually have got the hat out of just ONE ball of Excelana DK. And here you have it. Ravine by Woolly Wormhead worn by yours truly! I’m still not used to seeing myself in photographs but I am really trying hard not to hate every single photo just because I’m it. However  I love my hat!
It fits snuggly and naturally on the head. It frames the eyes exactly as it should. It feels and looks extremely stylish and is very, very warm. So does everything that a good hat should. Fabulous! And I added a brooch for a little vintage flourish.
So what better way to round off the blog tour than to offer a prize! For a chance to win a digital copy of Classic Woolly Toppers courtesy of Woolly Wormhead and two balls of Excelana DK in your colour of choice from Alabaster, Persian Grey, Cornflower Blue, French Rose, Ruby Red, Saharan Sand, Powdered Egg or Nile Green, just leave a comment telling me who is your favourite iconic hat wearer and why. They can be ‘real’ as in Marlene for example, or a character such as Holly Golightly. I’ll choose a winner at random on the 7th November. Please leave me an email address so that I can get in touch.
If you can’t wait to hear if you’ve won, you can purchase the book from Woolly’s website. The print edition is $16.99 and the digital edition is £9.
Good luck!
for now
Ruby xx
* (from Hats an anthology, by Stephen Jones, Published by V&A Publishing)