A working visit to the British Library yesterday reminded me of a very strong, almost obsessive connection that I have always had with printed matter and particularly, books. I have always been completely obsessed with them. As a very small child, books were the centre of my universe. I have read voraciously all my life, and collected books with even more enthusiasm than knitting patterns or wool. But then of course, knitting patterns come in the form of booklets, pamphlets and full scale books and this two pronged obsession has, I have recently realised, produced my own ever growing archive about knitting, sewing, craft and yesteryear in general. I have hundreds of books and thousands of patterns and at some point I am going to need to make sense of it all, to start creating a proper archiving system – that’s how big it is getting! However on this dark and dismal March morning, when Spring has declined to join us, I thought I would share some of the ‘Collection’ (sounds rather grand, but I guess that’s what it is). 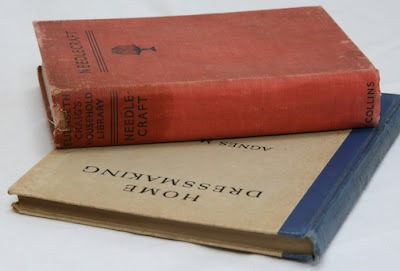 These first two books focus on craft in general in Elizabeth Craig’s book and specifically on dressmaking in Home Dressmaking – interestingly, this book is devoted to hand sewing only – no sewing machines in sight! 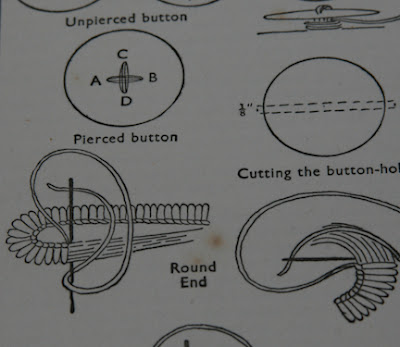 Elizabeth Craig’s book has some beautiful images of techniques, such as these elaborate drawings of working buttonholes, but I particularly like Home Dressmaking’s section on ‘New from Old’ which explains how to fashion something new out of old clothes and gives a three page list of possibilities: 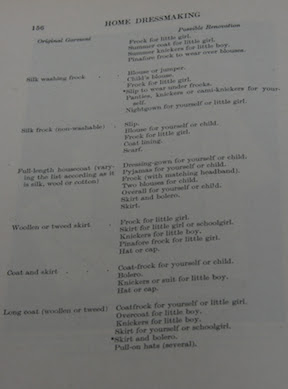 These next three books are from my Flora Klickmann titles. Flora was the Editor of ‘The Girl’s Own Paper’ and ‘Woman’s Magazine’. 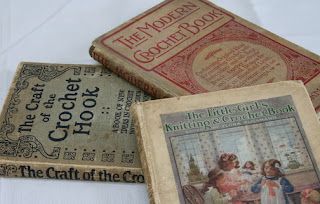 Another of my favourites is the John Paton Knitting and Crochet Book. This is the third edition with it sumptuous woodblock cover, which was printed in 1903. 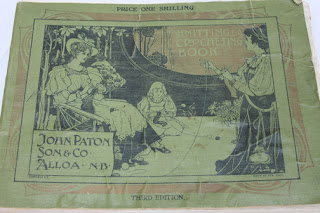 It has a vast array of knitting recipes within its covers. This is the contents list for the Chapters within and is compiled by M Elliot Scrivenor who was the needlework correspondent to the ‘Queen’ newspaper and late manageress of the Technical Institute of Needlework, London. 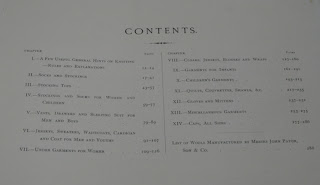 This next image is a tiny sample of some of the woman’s magazines and pamphlets I have, including Woman’s Weeky, Woman’s Own and the Lady. 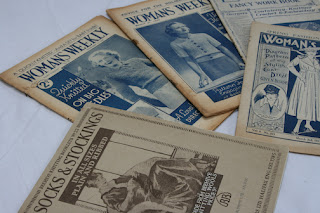 This model crops up almost every week in Woman’s Weekly and I would love to know who she was. 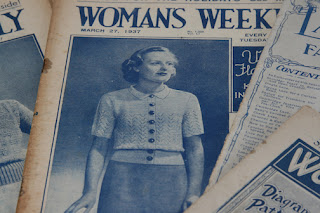 I now have a sub-collection of both Munrospun and Lux books. 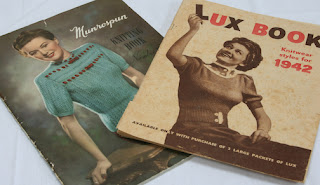 I adore the Lux books and the idea that you got the books through purchasing packets of Lux washing powder. I can’t imagine a major washing powder manufacturer going to such lengths these days.

This next book goes off on a slightly different tangent, but I love Mending and Repair books of all kinds. This one looks at all sorts of home repairs including 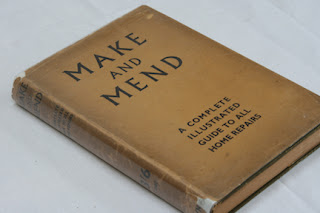 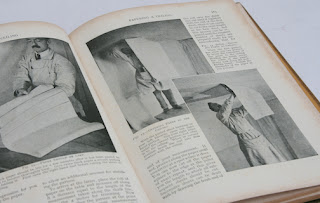 to how to press a suit. I love books that show domestic tasks beyond those we would probably think of as needing written instruction and that such care was taken with possessions. 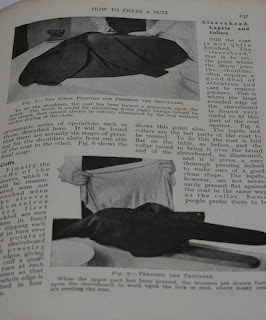 On that subject, this is probably my favourite of the mending books that I have. The Art and Practice of Mending was a Pitman publication from 1933. 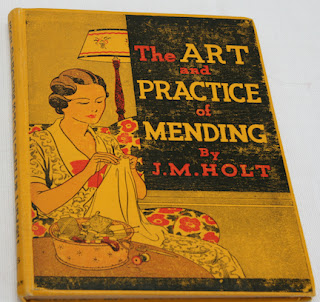 The front cover alone makes the book worth owning but the illustrations are absolutely beautiful. 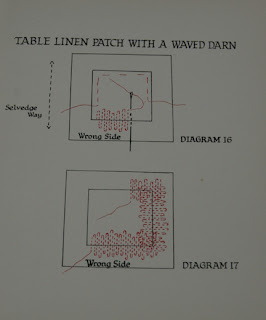 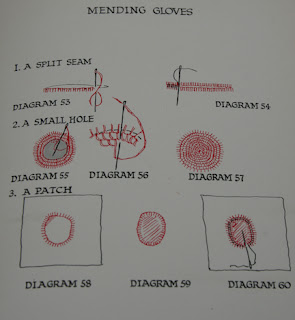 Here is a selection of some of my Odhams books – I have many more! 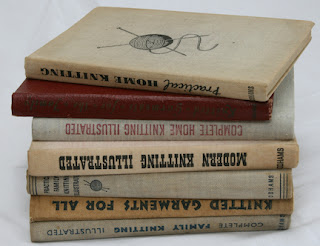 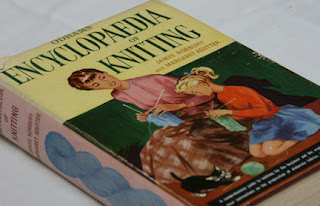 This one is a US publication which is very similar to the Odhams books but is written by Alice Carroll who was the Consultant on the American Red Cross Knitting Manual. Her Complete Guide to Modern Knitting and Crochet was published in 1947. 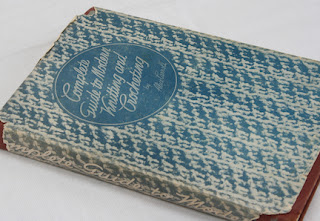 The Pictorial Guide to Modern Home Needlecraft is another Odhams publication – I have two versions of this book, one published in 1938 and the reprint from 1946. 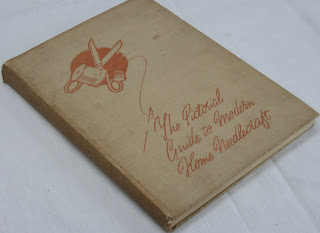 The 1946 reprint has this marvellous plate added at the front of the book, marking its chronological identity perfectly, and with the caption: 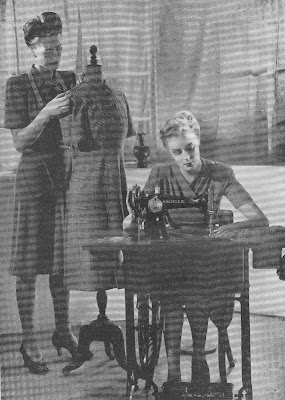 ‘With the right tools, a little patience, and a good knowledge of the basic principles of needlecraft, dressmaking for yourself and the family will prove as easy as ABC, and you will be able to take pride in saying “I made it myself”.” With the timing of this republication maybe it suggests that there were many women who had not had time to learn these skills during the war years and were in need of instruction.

No collection would be complete without Mary Thomas’s books. I also have her Embroidery book. 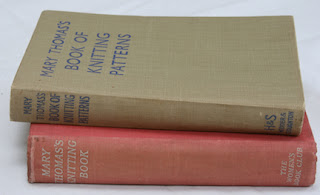 A couple of contemporary books looking backwards are No Idle Hands which looks at the history of American knitting and also Knitting by the Fireside and on the Hillside which is not an easy book to get your hands on, which looks specifically at knitting on the Shetland Isles with an economic slant. 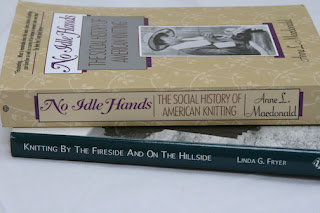 These three books are amongst my most treasured. The Encyclopedia of Needlework is quite an easy book to find, especially as several million copies of this title were printed worldwide but it has some stunning plates and intriguing stitches to try. 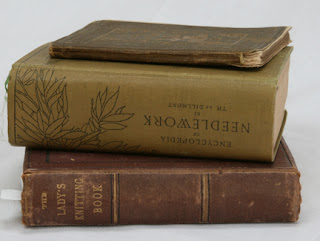 This tiny book though has some great gems in it 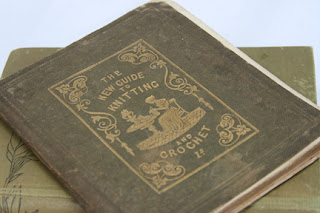 such as this pattern for Siberian Cuffs. This little treasure is from 1847 and as was usually the case at this time, has no illustrations. 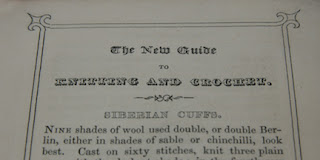 The last of these three books and my absolute favourite is The Lady’s Knitting Book from 1880. Again without illustrations, but I turn to this book again and again for inspiration. 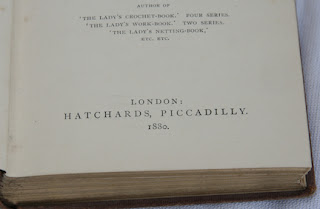 I also love the fact that the book is signed and dated – January 30th 81 (I am assuming 1881 by the style of writing, ink used etc) and love the idea that this was probably a christmas present based on the date. And again a lot contained within – 216 receipts.

It is also interesting that during roughly the same period the ‘patterns’ are sometimes called recipes and then other times called receipts. So close in spelling, did one come from the other I wonder?

So these are just a tiny part of my collection. The magazines and single patterns are too numerous to photograph individually but I’ll try and share a few more at a later date.

All images copyright Susan Crawford © 2012 and must not be used with express permission being granted by the copyright holder.