Thank you so much for the lovely response to Tess Young’s Clemmie design. To celebrate the end of Wool Week I wore it to a knitting event at Williams Wools in Kendal on Sunday. It was incredibly comfortable and easy to wear and I received a lot of compliments! I wore it with one of favourite Cath Kidston tea dresses and felt relaxed and yet elegant. Just the result I was hoping for.

Anyhow, now that we are well under way with the Knits for a Cold Climate collection, I want to give you some more general background on the period we cover with the patterns. The 1920s and the 1930s were some of the most fascinating decades in terms of fashion, art and culture.

The 1920s were very much a reaction to the desolation and change brought on by the Great War (also known as World War 1). Many things had changed as a result of the War: Women had been thrust into industry (and had received the right to vote), air travel and modern media were both making the world smaller and larger, and a whole generation was permanently scarred by the losses incurred by the War. Is it any wonder that people decided to drown their worries and anxieties in fashion, art and music? Berlin, London, and Paris became fashionable cities where penniless artists could mingle with rich socialites – the world may have changed irrevocably, but the noise of despair was drowned out by jazz, cabaret, flappers, fast cars, cinema and bohemian artists.

Amid all this hedonism we find Nancy Mitford. Nancy was part of the “Bright Young Things” set – a group of bohemian and flamboyant aristocrats hell-bent on seeking entertainment and flying in the face of conventions.They were the original celebrities famous for being famous – and were chased throughout London by journalists as they partied hard, indulged in various substances and experimented with unconventional relationship configurations. Nancy was in her late teens/early twenties and would later base several characters in her books upon the friends she made during this period of her life. People like Noel Coward, Cecil Beaton (whose beauty as a young man is staggering), and Evelyn Waugh were also part of this set alongside people whose charisma and excess never transcended the period.

And they all looked fantastic. Beaton is one of the most renowned and influential portrait photographers and I have studied his work at length. One day I’ll talk more about him but let me just share this portrait of Marlene Dietrich and rejoice in his brilliance (admittedly from the 1930s but who’s counting?).

In “A Stitch in Time, vol 1” I go into detail about the 1920s silhouette, but suffice to say the ideal 1920s girl looks completely unlike her mother. She looks boyish with short, bobbed hair and a wardrobe designed to conceal her hips and bosom. Her eyebrows arch towards the sky in an expression of perpetual wonder and her lips are painted with a perfect bow (Lillian Gish and Clara Bow – stars of the cinema – were huge influences upon this look). Ladies’ fashion was both androgynous and overtly feminine: the lines of the outfits may have been boyish, but the materials were sumptuous and decadent with silks and velvets ever present. The clothes allowed for unprecedented movement – the Flapper girl needed to be able to dance, play tennis, and compete in death-defying car races – but she looked completely glamorous whilst doing so. The 1920s It Girl appeared to have it all. Also see my recent blog post for more detail about the knitted fashions of the period.

All this decadence, hedonism and care-free behaviour hid a lot of darkness – and eventually it all came crashing down. I’ll discuss it more when we get to the 1930s, but I hope you enjoyed a brief glimpse into the Roaring Twenties.

If you really want to immerse yourself in this most decadent of decades why not indulge in some movies, books and art from my lists below:

If you want to watch an entertaining British film about the Roaring Twenties, I can also recommend Bright Young Things, a 2003 film by Stephen Fry starring notables such as James McAvoy, Emily Mortimer, Peter O’Toole, David Tennant, Michael Sheen and Richard E. Grant (many in “blink and you will miss them” roles) and the vicar in Our Zoo! 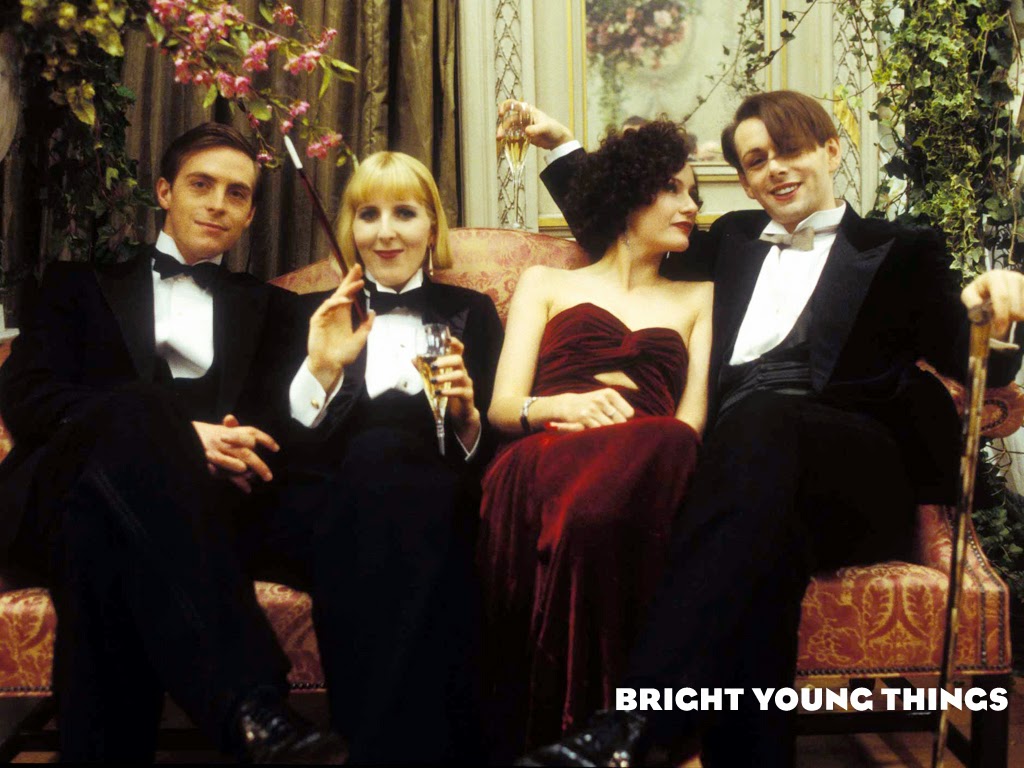 What other films, books, music or art would you recommend from, or about, the 1920s?