A slightly different post to what I had originally intended, I thought I would dwell for a moment on that dreadful wardrobe conundrum – wearing knitwear in the summer. We have had good weather over the last few weeks here in the North West of England, but in fact it has probably been three years since we have experienced more than two consecutive days of sunshine. And it has been wonderful. But, other than throwing a little cardi on of an evening I was struggling to wear my knitwear. So I decided to look at some of my previous work and see how I could interpret it for summer wear.

The first garment I decided to revisit, is a free pattern on knitonthenet, from a couple of years ago, called Blanche. 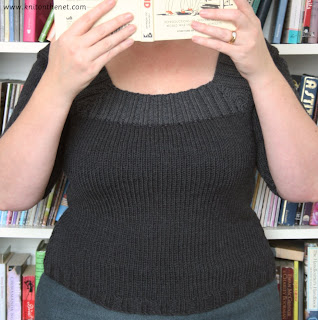 I have worn the original garment so often it is now almost falling apart and is actually in the mending pile for a bit of careful darning and repair. However it is a really flattering pattern, short sleeved with a low square neck, making it perfect really for summer wear if it only wasn’t in merino wool! So I checked my stash and found some Tilli Thomas Pure and Simple in a soft yellowy gold called Rattan and an additional skein of Tilli Thomas Rock Star in the same shade but with beads threaded through the yarn. Both yarns are 100% silk and the same tension as the original yarn used – Filatura Di Crosa Zara Plus – 18 sts to 10 cm (4 inches). The yardage is considerably longer on the silk yarn so I only needed 2 skeins of the main yarn and the 1 skein of the beaded yarn, so although quite an expensive yarn per skein, it was quite reasonable over all. And this is the rather lovely result. 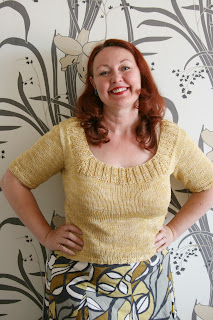 I knitted the 38-40 inch although I’m a little bigger as the silk will very likely stretch and I would like the sweater to still look fitted. Interestingly enough, this was me in the original photos for knitonthenet, but I was dreadfully self conscious and didn’t think people would want to look at photos of me so hid my face. I’ve got a little bit better these days but still don’t like seeing myself! 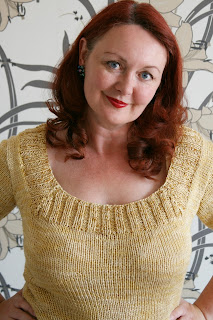 The next pattern I revisited didn’t require any interpretation except to make it in my size! It is The New Cowl Neck Line from A Stitch in Time. 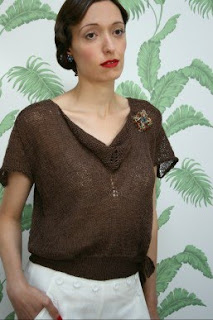 It is knitted in Habu Silk A-4 which I still had quite a lot of since using it on a number of garments in A Stitch in Time. I decided to use this warm, earthy, coppery tone which I have never worn before but which I really like. I followed the pattern for the third size exactly, other than making the waist belt longer than the pattern and gathering the cast on edge of the body into it slightly more than in the original. 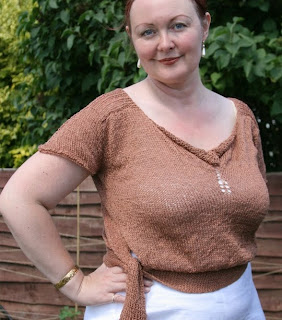 I did this due to the 12 inch difference between my waist and bust and I wanted this one to sit on the waist rather than on the hip, where the belt would accentuate the width of my hip rather than the comparative narrowness of my waist. It does require high waisted skirts or trousers to accompany it, but as the original is from the 1930s this would be appropriate anyway. I’ve paired it here with my long white linen skirt which has a knack of looking very ‘period’ but is actually only a few years old.

I am still knitting the last garment I want to talk about, and it is the Adorable Bed Jacket from Vintage Gifts to Knit. 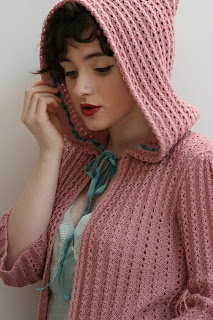 I am knitting the 40 inch and am using Anchor Artiste Crochet Linen, which is about a 1 ply laceweight yarn, but using 3.25 mm needles as specified in the pattern. 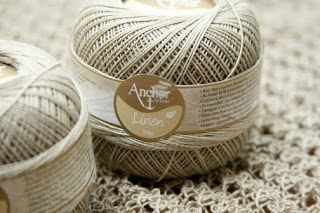 This is resulting in a fabulous openwork style lace pattern and is coming out pretty successfully to the required garment size. 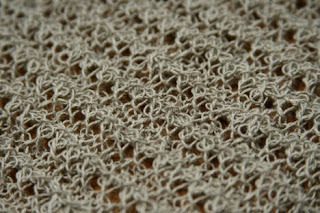 I just love how this looks and shows how versatile a little pattern this jacket is. It looks completely different from the original but just as good. The fabric being produced is a little crisp at the moment but I’m sure once it is washed it will begin to feel more like an aging linen fabric. I have still to decide on the perfect ribbon trim but I would like to see the washed results before making a final decision. 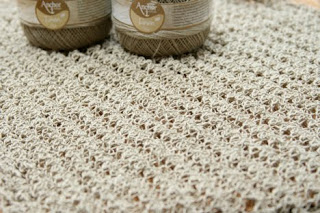 At 6 a.m. tomorrow a hose pipe ban begins in our area so no doubt it will rain solidly for the next two weeks, but here’s hoping I’m wrong.