This wasn’t a post I ever imagined I would need to write. Bowie was immortal, some sort of other-wordly, supernatural creature that transcended normal earthly rules and would exist forever. The news of his death today has proven this foolish belief to, of course, be wrong. And so he is gone. Incredibly the end of his life would appear to have been beautifully, extraordinarily choreographed into a piece of art itself with the release of Black Star and the video of Lazarus, leaving a message for us all.

But just why did he matter so much? I can only speak for myself and for the people I knew back in the 1980s when as ‘2nd wave’ Bowie fans we embraced him as our own, the spiritual leader of we, the freaks. I grew up in a Northern town struggling to survive in 1980s Britain. I felt ‘apart’ in school and becoming part of the ‘real’ world, getting a job at 16 in a local bank, made me feel even more different than I felt before. I was drawn to the alternative scene that already existed. Most towns and cities around me had at least one club in it which had an alternative night each week. On those nights we would come out of the shadows, put on our handmade or second hand costumes and dance until we dropped. Bowie would get played at least once every night and was the undisputed king of the scene. I had so many friends who could quote every line to every song he had ever written.

I rejoiced in the freedom those nights gave me. I wore more and more outrageous and inventive outfits, exploring the hidden me who was unable to escape otherwise. Like him (or so I believed) I took on the persona of the creature I became and it seemed to give me artistic and creative freedom.
I felt safe behind my mask and it gave me the strength to edge my way into the world. For the first time I had friends. We all felt the same about Bowie and the music scene that built up around that love. Interestingly for a ‘scene’ we each had our own very strong visual identities which could change depending on what look you were trying for at the time. It merged rockabillies and pre-goths, punks, vintage kids, new romantics, transvestites, straight guys who wore make up, ex-northern soulers, ska and two tone lovers, gay, straight, black, white, there were no rules. Basically if you didn’t quite fit in with the norm, were non-conformist in some way, you could find a place at the Temple of Bowie. Out on the streets we would get threatened, sometimes beat up, often abused verbally, but there we were safe and accepted. 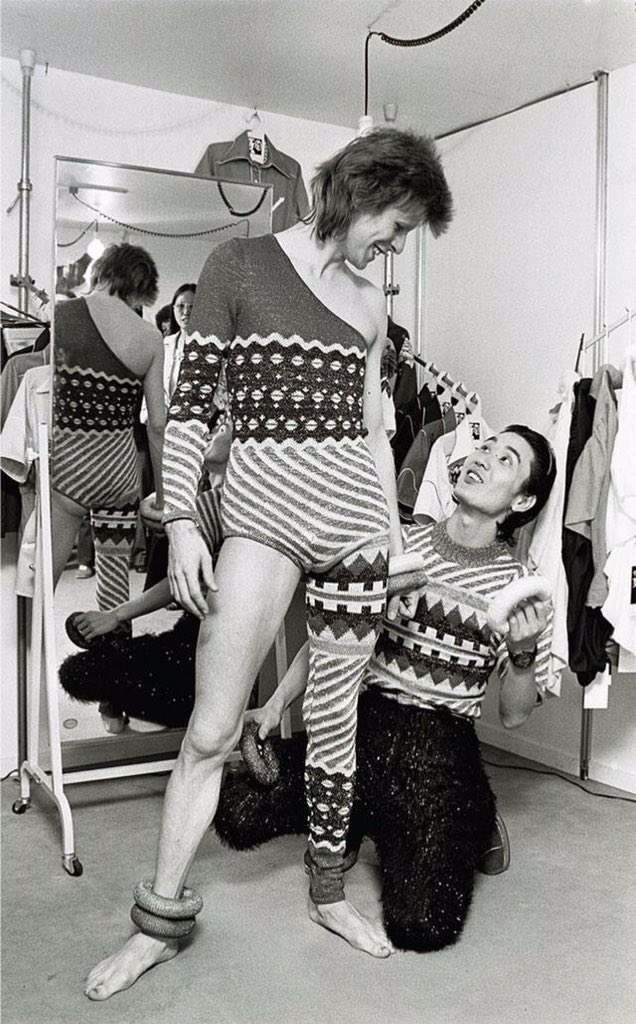 The music that emanated from those clubs was equally alive and dangerous as Bowie. Some of my favourites were Empire State Human by the Human League (can you imagine Phil Oakey existing without Bowie going before him?), Homosapien by Pete Shelley, I was a teenage werewolf by the Cramps, anything by The Cure or Siouxsie and the Banshees and of course, Tainted Love by Soft Cell. Marc Almond has of course spoken at length about how Bowie freed him to be himself and escape from the narrow world he found himself in. Bands such as Frankie goes to Hollywood had come along with a sexual freedom that could only have emerged in a post-Bowie world. And so the list goes on. Boy George could not have been Boy George without Bowie. Its hard to imagine Ian McCulloch and Echo and the Bunnymen without Bowie going before. Its highly unlikely the glorious band Suede, would have the sound they have if they had not listened to and been influenced by him or whether Jarvis Cocker would quite be the Jarvis we know and love without Bowie in his life. I could go on and on and on. There are probably bands and artists who have been influenced without even knowing it. This influence continues to this day with artists continually being inspired by his music, his body as an artform, his merging of artistic genres, his collaborations, his individuality, his refusal to be pigeon-holed musically, creatively or as a human being.

We have all benefited from his presence on this planet. Only last night I watched a re-run of the first The Voice (UK) show of the current series.  On to the show came a young girl, Cody Frost, 16 years of age. Her look was a cross between skin head and punk. In fact I think she described herself as a failed punk. She sang the most amazing version of Lay All Your Love on Me by ABBA and reminded me of a young Sinead O’Connor. Asked what music she listened to, she said ‘angry songs’. She looked and sounded amazing. A number of the judges tried to choose her for their teams but she went with Boy George. And I said to my husband how fantastic it is to live in a world where it is now perfectly acceptable for someone who looks, sounds, acts and represents ‘difference’ to appear on prime time BBC TV without comment, criticism or censorship. Its so easy to forget that this acceptance is a very recent thing and has been very hard fought for. We are lucky in Britain not to be routinely judged and censored for how we look, for who we are, for our sexual orientation and we owe much of this to trailblazers like Bowie who stood up and took the flack. My heart is broken today but we are better for having basked in his light than to have not.

If he is to have a lasting legacy beyond his music, this is what we must not forget – Bowie changed our lives & gave us permission to be whoever or whatever we want to be. Just imagine the world if he’d never opened that door for us.


If you’ve never listened to David Bowie or not sure where to begin, can I recommend the album Hunky Dory as your starting point – it features amongst others, the unbeatable songs, Oh you Pretty Things, The Bewlay Brothers, Kooks, Life on Mars, Queen Bitch – need I say more?