To mark the republication of A Stitch in Time volume 1 I thought I would take a look back at knitwear and knitted fashion during the decades covered by both this, and volume 2 in a little more detail –

Britain was a rapidly changing place as the 1920s dawned. World War I resulted in dramatic social upheavals compared to its pre war days. One of the most significant changes was that in 1918, women over 30, won the right to vote. In the four years preceeding this landmark event women, had taken the place of men in the workforce, whilst World War I raged across Europe. Women, naturally and almost without thinking, became more independent and ‘liberated’. And, with the dawning of a new decade, the desire for a different type of dress, that enabled them to participate more in life, without the constrictions of corsets and tight, restrictive, layered, long clothes changed the way women dressed for ever. 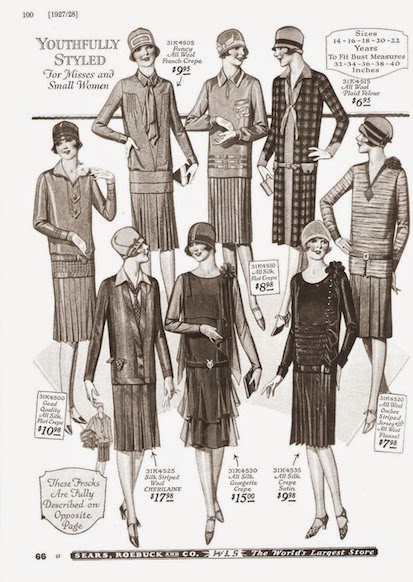 Many women wished to remain in the workplace, and many more began to take part in leisure and sporting activities, such as swimming, tennis and golf. A new, lean silhouette became desirable with women wanting to look slender, athletic and young. Previously long hair was cut short into a bob, make up became more and more popular and skirts became shorter and shorter. 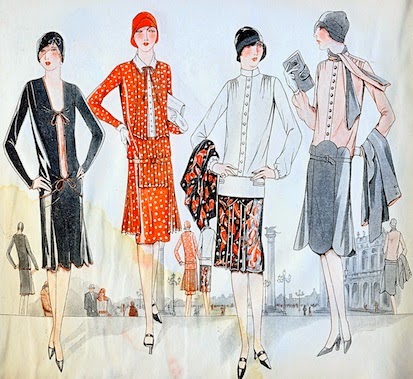 Breasts and curves were particularly unfashionable, with women going to extreme lengths to appear flat chested with slim hips – many binding their breasts and wearing girdles, just as restrictive as the corsets they had rejected. Androgyny was all the rage with many girls adopting a boyish appearance wearing sweaters with shirts and ties. 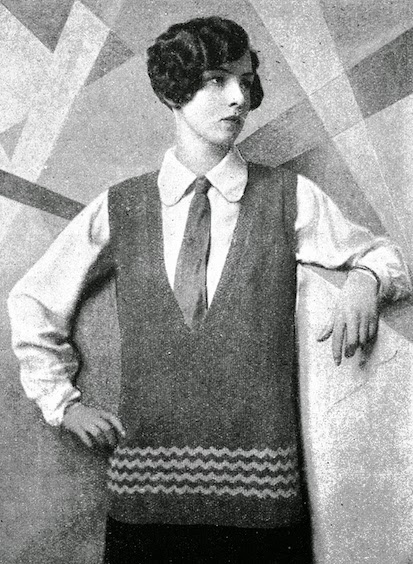 Sweaters were generally worn long and loose hiding the natural form. Neck lines had low, round or V necks, with stocking stitch garments being particularly popular. The sweaters were worn over skirts that finished just past the knee with natural coloured stockings – suggesting naked legs! Cloche style hats became incredibly popular pulled down over heavily made up eyes.

Nights out and dancing – informally – became incredibly popular, with ‘flappers’ dancing to the ‘Black Bottom’ and the ‘Charleston’. Stars such as Josephine Baker and Clara Bow – the ‘It Girl’ – brought a new sexuality to the fore. A more sophisticated beauty was seen in Greta Garbo, but the actress who epitomised the 1920s look more than any other was Louise Brooks.

With her sharply cut bobbed hair and straight fringe, cupid’s bow lips, dark eyes and lithe body, she encapsulated the era. Like many of the other famous women of the time – Josephine Baker and Clara Bow included, she gave out mixed messages about her sexuality and enjoyed questioning traditional stereotypes.

Other style icons of the 1920s, included for the first time, adventurers – such as aviator Amelia Earhart and most notably, sports stars such as tennis champion Suzanne Lenglen, whose sportswear was designed for her by Jean Patou, and is probably one of the earliest examples of sport and fashion working together in this way.

Sportswear as everyday wear really became accepted as a fashion statement however, when Coco Chanel introduced jersey garments such as an easy fitting cardigan jacket worn with a soft pleated short skirt in 1922, and was herself seen wearing men’s trousers. Chanel is also credited with introducing the knitted one piece bathing suit, which remained popular for many years.

But how did these fashions feed directly into hand knitting? The rise in popularity of knitwear and knitting in the 1920s can probably be credited to one sweater. In 1922, James A Smith, a draper, of Lerwick, Shetland, presented a hand knitted Fair Isle sweater to the then Prince of Wales. 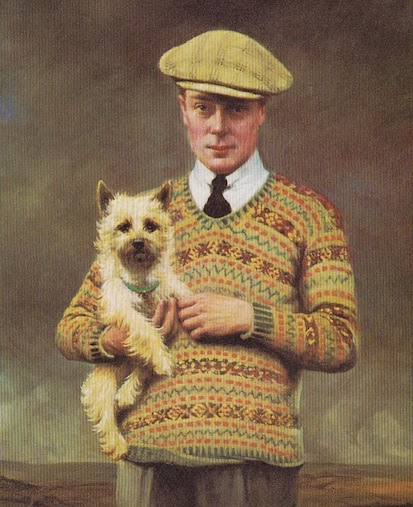 Designed to be worn whilst playing golf it created a huge surge in interest in hand knitted garments as a fashion statement. Edward VIII, as he became, was a fashion icon of his time and  wearing this V necked Fair Isle sweater when golfing, caused a sensation. The long lines, V neck and masculinity of the garment also appealled to fashionable ladies of the time, and became the garment to be seen in when golfing or taking part in outdoor activities, such as walking and shooting.

Even Harrods bought the sweaters from James A Smith, creating a huge demand for garments knitted in Shetland and Fair Isle. Knitting on both islands was big business, with two colour garment production increasing rapidly during this period. New patterns were created by the knitters, adapting designs from wallpaper, tiles, magazines etc. A pattern book of fair isle charts was first published on Shetland sometime between 1925 and 1930 which provided knitters with charted instructions of new innovative fair isle patterns. 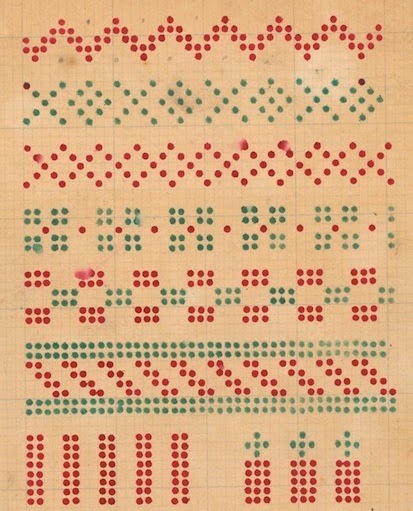 Most knitters were also encouraged to keep their own hand written chart books, a practice that continues to this day.

Despite all the glamour portrayed in the contemporary media of the ‘Bright Young Things’ poverty in Britain was a significant problem, with many people living in dreadful conditions. In fact, the workhouses still existed until 1929. There was significant unemployment and, in 1926, a General Strike was called. To escape from their circumstances many people spent a great deal of time at the cinema, absorbing the beauty and sophistication seen on the big screen. Literacy improved over the decade allowing a wider variety of women to read the women’s magazines of the day, and work from knitting patterns. The hand knitting of fashionable, outer garments by following a pattern, rather than only knitting underwear, comforters etc., out of necessity and often without a pattern, became widely popular, filling an economic need.

Woman’s Weekly (which had been founded in 1911) and Woman and Home, first published in the mid 1920s, began to publish regular knitting patterns aimed at  the fashion conscious woman, who couldn’t afford Chanel, Patou, or Harrods, but who wanted to look like the woman they saw on the big screen and in magazines and newspapers. 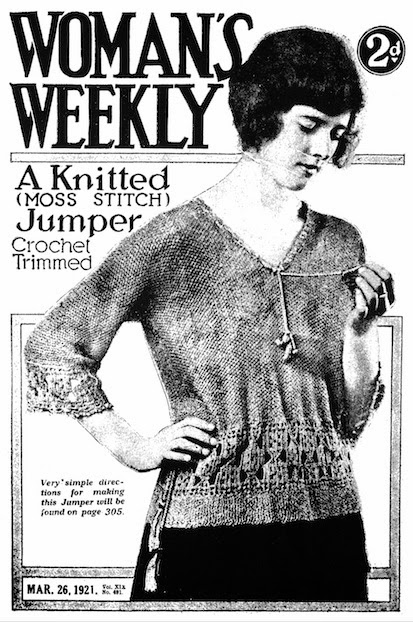 Woman’s Weekly only began publishing knitting patterns on a weekly basis from around 1932/1933. However, with single pattern leaflets still relatively uncommon in the 1920s the gap began to be filled more frequently by these magazines, with unisex patterns being offered by Woman and Home for a Fair Isle sleeveless cardigan

and Woman’s Weekly presenting a fair isle pullover for golf or walking, with a deep V neck on a completely flat chested female model.

Designs for tennis wear and long line deep V neck sleeveless pullovers were featured, with an even mixture of pattern instructions knitted in the round or in separate pieces. 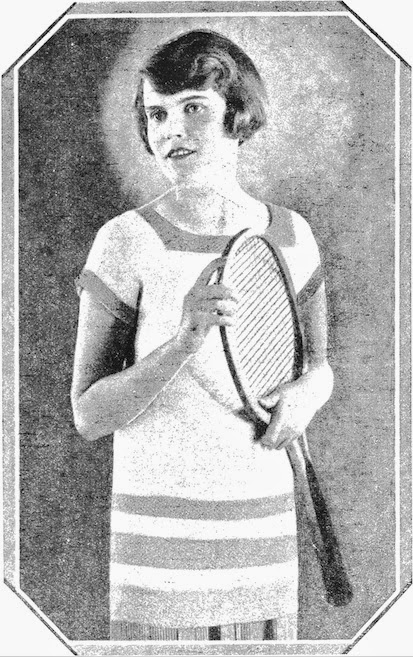 Patons & Baldwin, Weldons, Munrospun and Scotch Wool & Hosiery Stores and several others, did release single patterns and pattern booklets, the most noteable being ‘Woolcraft’ from Patons & Baldwin, still being published today, but which was first printed in the 1910s.  These companies produced pattern leaflets to promote and sell their yarns. Whilst some of these patterns featured contemporary designs, many were traditional designs being ‘revisited’ such as Sock and Spencer patterns. In the US, two major yarn manufacturers in particular were producing ‘modern’ knitting patterns to tap into this increasingly popular market. These were Minerva and Columbia. 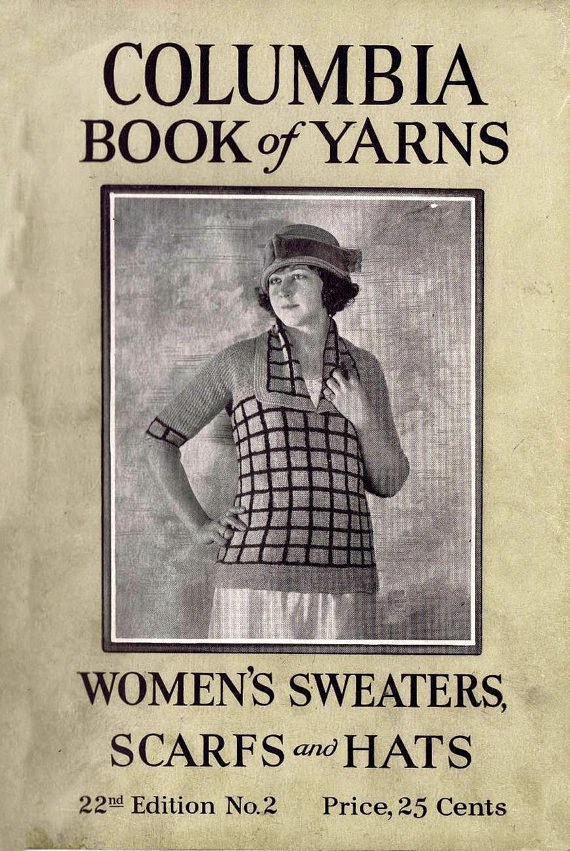 Once again, both used their pattern books to promote their yarns,  but tapped into the latest trends. Their publications usually offered a selection of knitting and crochet patterns, in fact, patterns of this period from all manufacturers and magazines often combined both crafts assuming knowledge of both by the readers.

With the Great Depression and the Wall Street Crash in 1929, the world became a very different place as it moved into the 1930s, but the creativity and exciting design that can be seen in that period most definitely has its foundations in the 1920s, and the sweater, jumper or pullover, as we know it today owes its birth to the modern, independent young women of the 1920s.

I have found that over the years I have become more and more fond of the styles of this decade and have gained great inspiration in the shapes, drape and patterns of the period whilst working on a new mini collection featuring Fenella. Its not quite ready to be revealed yet but watch this space!

A Stitch in Time volume 1 is still available at the discounted price of £30 (plus p&p) until the end of August from my website.

So, for now,
Susan xx