In the autumn of 1914, a 19 year old John ‘Herbert’ Ogden, from Blackpool Lancashire, enlisted in the newly formed “Kitchener’s Army” to fight in the “Great War”. Like hundreds of thousands of other young men Herbert firmly believed it was his duty to fight when his country called.

Herbert was born in Oldham, the second child of Thomas and Edith Ogden. Thomas was a successful licensed victualler  and had sent his son to a boarding school in Scotland. Herbert had three sisters and two younger brothers who all admired the tall, good looking and refined young man that Herbert became. Herbert’s mother had passed away in 1912, so was not there to see her sons join up one by one.

Due to his education Herbert was placed with the Royal Fusiliers 21st Battalion (4th Public School Division) and was sent to Clipstone Camp in Mansfield, Nottinghamshire for his basic training.
By 1916, Herbert had received his ‘commission’ and was promoted to Second Lieutenant in the Loyal North Lancashire Regiment (5th Battalion, Territorial Force).

Herbert fought in the Battle of Arras in France on Easter Monday 1917 and ever since the family, including my husband, Gavin – Herbert’s great nephew – have believed that that is where Herbert died in battle. Herbert’s war record like almost 70% of others from before 1940, was destroyed in a fire at the War Office so details of his movements had been hard for the family to trace. And more significantly, no one thought to doubt handed down oral stories of Herbert’s tale. Where Herbert was buried was sadly unknown.

Only two or three weeks ago an amazing family treasure came to light. Buried in a box deep in the attic, a photo album belonging to Herbert’s sister Edith was unearthed. Edith was also the sister of Florence – Gavin’s grandmother. In it are numerous photos of a smiling, handsome, well groomed young Herbert in uniform. Amongst these photos are even a number of Herbert at the training camp in Mansfield (shown above). But one photo in particular made me decide to write Herbert’s story.

This photo of an elegant Herbert was taken in 1915 during Herbert’s training. Under his coat he is wearing a thick, warm looking hand knitted scarf. Knitted by one of his sisters or by one of the hundreds of thousands of women who knitted for the troops during the WW1 conflict? Dorothy Peel in her book “How We Lived Then” (1929) writes of women knitting socks, mitts, body belts, hats, scarves – ‘comforts’ as they were known – for the soldiers. Knitting took place everywhere, in trams, trains, theatres and parks. In “All Quiet on the Home Front” (Richard van Emden and Steve Humphries, 2003) it tells the story of a minister being asked by local women if it was right or wrong to knit socks on Sundays for the soldiers. The minister told them it was quite right, which they were very pleased about. In his “A History of Hand Knitting”, Richard Rutt explains that wartime knitting hit a peak in 1915 and was further fanned by an appeal by Queen Mary for hand knits for the troops in 1916.  In fact, troops apparently received so many hand knitted comforts that socks and gloves were used as dish clothes and tea towels!

Herbert’s simple scarf really doesn’t need a pattern but I went through my patterns anyway to see if I could actually find a pattern for a garter stitch scarf. The most likely place was the first edition of “Woolcraft” published  by J and J Baldwin shortly before the outbreak of war in 1914, and which before the end of the war, four years later, was on to its third edition but I was unable to locate a scarf pattern like Herbert’s. In “Knitted Comforts for our Sailors, Soldiers & Airmen” by Scotch Wool & Hosiery Stores is an almost identical scarf to Herbert’s, but the copy of the book I have is much later in date, although I believe it may be a reprint of an earlier booklet as the yarn recommended is “Wheeling”. In Richard Rutt’s book he has described this as a coarse woollen-spun yarn, usually 3 ply, a description which he in turn probably got from one of the earliest Woolcraft’s where it is described as:

“a term applied to a distinctive material which, by reason of its early association with the town of that name, is often referred to as ‘Alloa Yarn’. The word ‘Alloa’ is, as a matter of fact, often used as a synonym for the thick woollen thread or ‘wheeling’ yarn which, for hand knitting purposes is generally sold in 3 ply and in a skein of 2 ozs., eight of which form a head of 1lb. Wheelings, as a class, when of good quality, fill a very useful place as producing warm woolly fabrics specially suitable for heavy socks, stockings and garments for outdoor wear, such as get softer and more comfortable the oftener they are washed. A cheap wheeling can, however, be very deceptive in point of durability and, in this class of material especially, it only pays to buy a good reliable article”.
By the time Woolcraft updated editions were being published in the 1920s this description was no longer being included in the knitting definitions and instructions. This suggests that the use of this word was out of date even for the late 1930s when I believe the Scotch Wool book was printed, and therefore possibly indicates a reprint of an earlier publication. However in the Scotch Wool booklet, Wheeling is described as the same as Double Knitting and “a splendid quality for motor rugs, capes and scarves, heavy weight jumpers and pullovers. The best quality for ‘brushing’”, thereby changing the definition and maybe suggesting Greenocks, who published as Scotch Wool, were using the name in a different way? This is the project included in this publication. 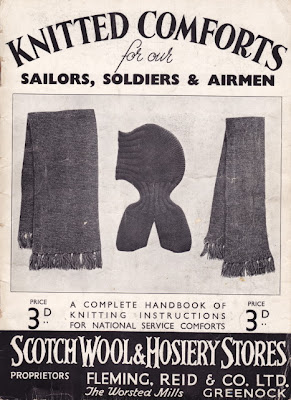 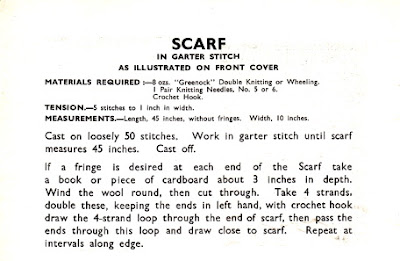 There is nothing I can do to change what has passed, but it would seem appropriate if people were to knit a simple scarf and remember Herbert. So as I can’t actually find the pattern that was possibly used to create his scarf I have written a simple pattern of my own and so this is “Herbert’s Scarf”. 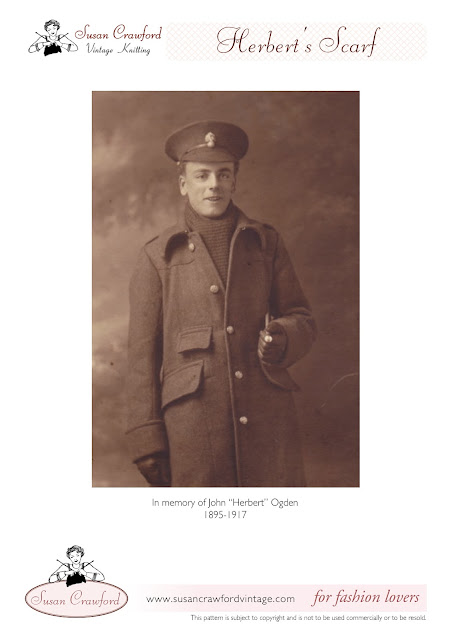 You can download the pattern free of charge here and if you would, think of Herbert when you knit from it.
Delving deeper into Herbert’s past finally revealed as much of his story as we are ever likely to know. On 31st July 1917, the Battle of Passchendaele (or Third Battle of Ypres) in Belgium, commenced. One of the most controversial and horrific battles of WW1 began in torrential rain, which refused to stop.
And since that morning, after going over the top into No Man’s Land into craters of mud, barbed wire, gas, bodies and bullets, Herbert, only 22 years old, was never seen again. His date of death is given as 31st July 1917 but his body was never found. His name however, is carved into a panel in the Menin Gate Memorial in Ypres, so that he will always be remembered. 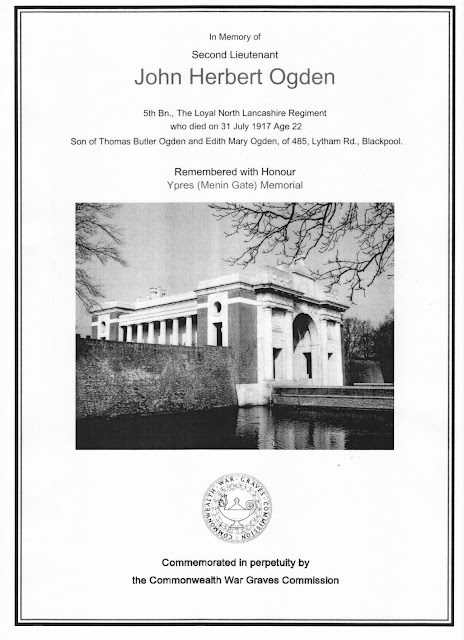 Over half a million men, including over 350,000 British and 260,000 Germans, died at Passchendaele, many of them drowning in mud and rain-filled trenches. After surviving the horrors of this battle, the poet Sigfried Sassoon wrote about it in his poem, Mud and Rain –
Mud and rain and wretchedness and blood.
Why should jolly soldier-boys complain?
God made these before the roofless Flood –
Mud and rain.Mangling cramps and bullets through the brain,
Jesus never guessed them when He died.
Jesus had a purpose for His pain,
Ay, like abject beasts we shed our blood,
Often asking if we die in vain.
Gloom conceals us in a soaking sack —
Mud and rain.
In Memory of great-uncle John ‘Herbert’ Ogden: 1895-1917