for the want of a stitch the pattern was lost! 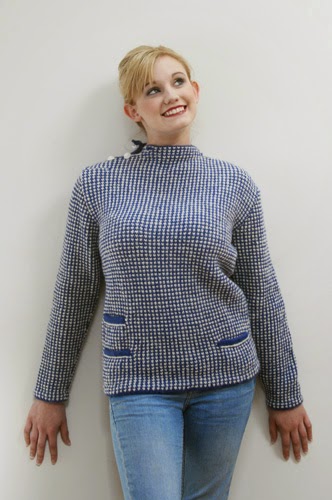 Designed in Paris is a late 1950s pattern which appears in A Stitch in Time Volume 2. It is a beautiful tunic style textured jumper knitted in two colours of Excelana 4 ply. It has proven a very popular design but recently I received an email from a lady who was having trouble reproducing the pattern as it looks in the photos.

When I receive a pattern query I always return to the pattern and have a good check through it. When everything seems mathematically and typographically correct I usually knit a sample square so that I can provide the knitter with very precise instructions on how to cope with the difficulties they are having.

On this occasion I began to work the four row pattern and immediately realised that 1. On the first couple of pattern rows things didn’t work quite according to the instructions and 2. By following the instructions I was getting a different pattern!

This obviously seemed very odd so I looked closely at the finished garment and the book photographs and it dawned on me that the finished piece had resulted in a quite different looking pattern than the instructions would suggest. So how on earth had this happened.

Below is the only photograph that the original sample knitter and I had to work with when we were creating the new version of the pattern. 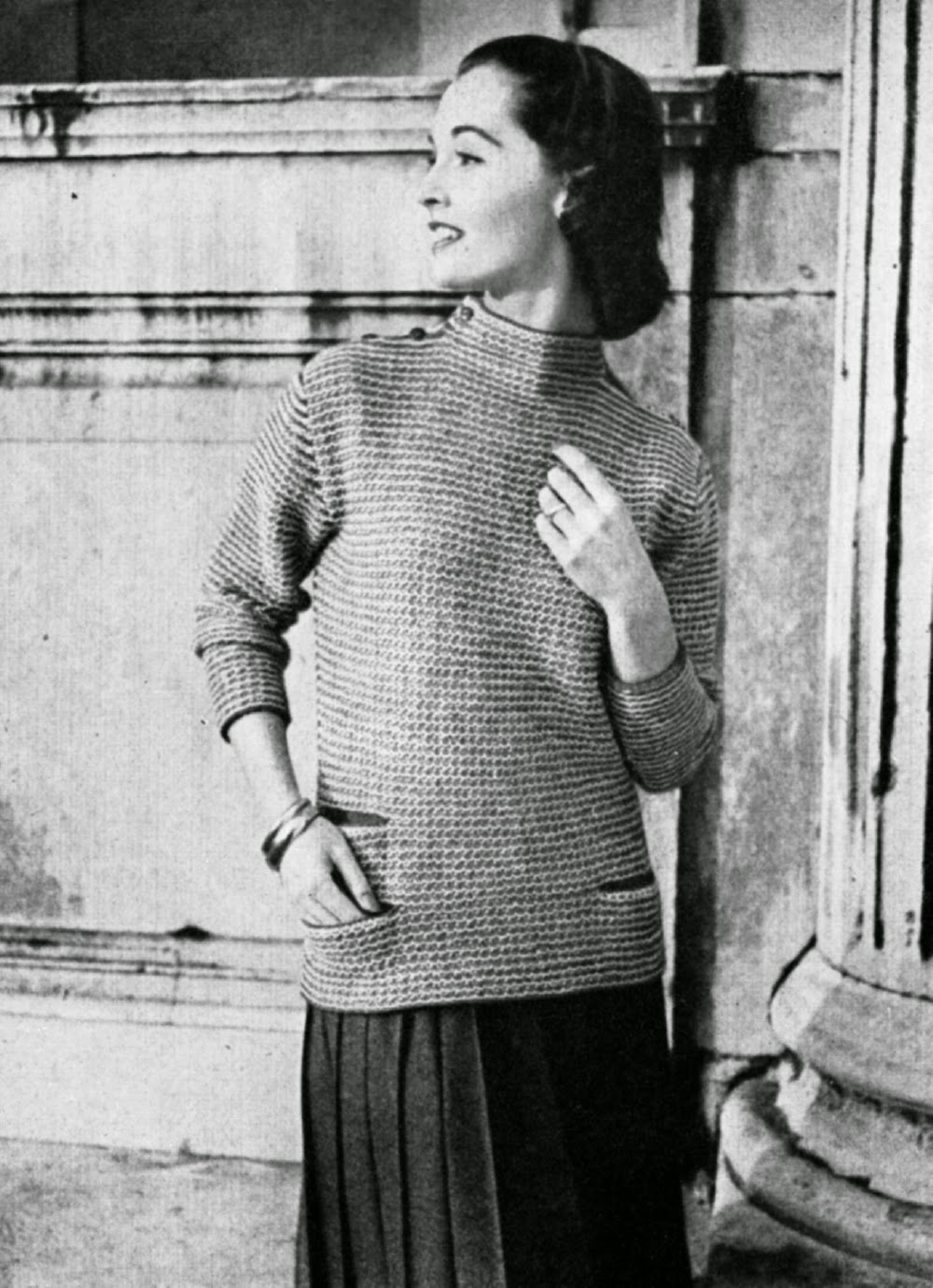 Looking at it now I can see that there is a difference between this and the new version but at the time, immersed in rewriting 80 patterns I somehow managed to miss the fact that the stitch pattern doesn’t quite look the same. What would appear to be the cause of the mistake in the knitting is that the very first set up row as written makes it difficult to work the first pattern row as described and the sample knitter had made a choice of how to proceed. Unfortunately looking at the pattern notes there doesn’t seem to be any mention of the problem and I consequently have also missed it.

On rows 1 and 3 of the 4 row pattern you are told to ‘knit into loop only below next st and drop st off needle’. Instead of carrying out this action you need to knit into the ‘space’ below the next st on the needle as shown below: 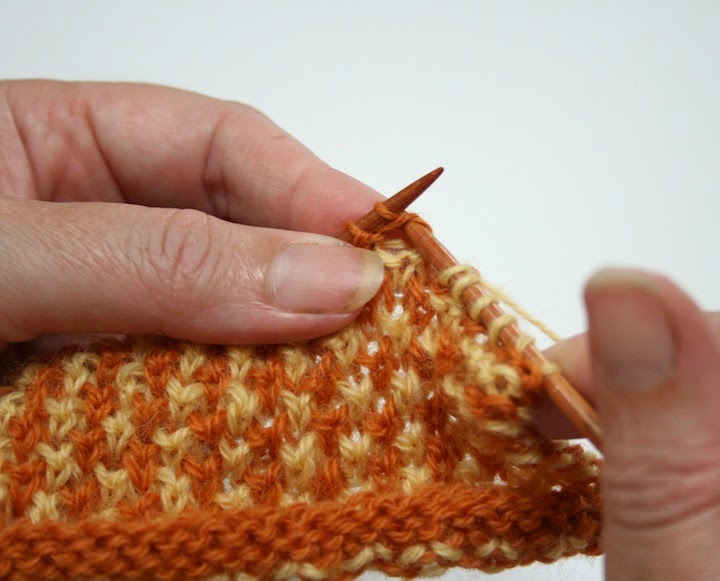 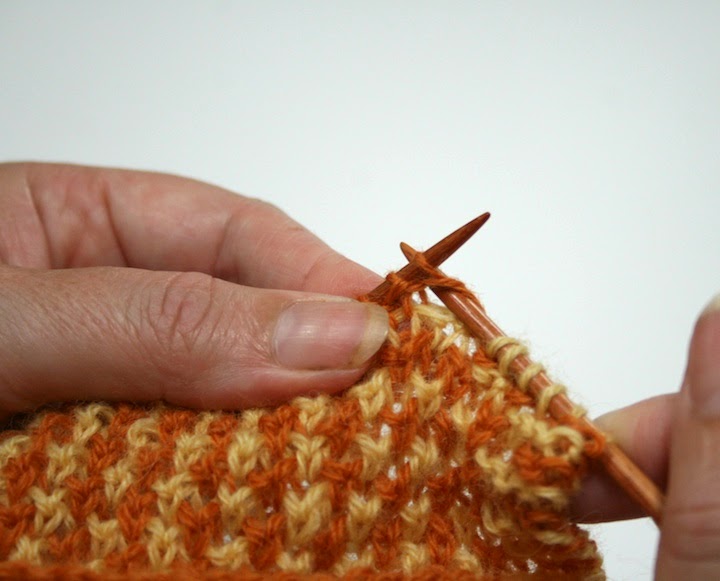 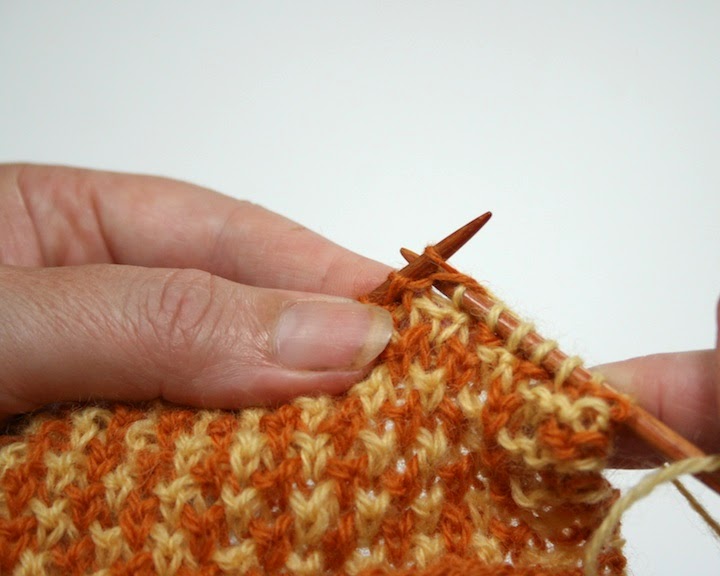 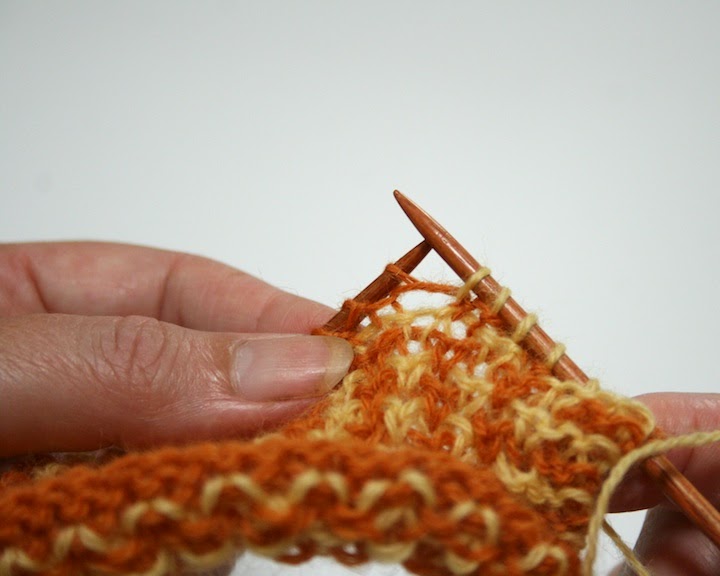 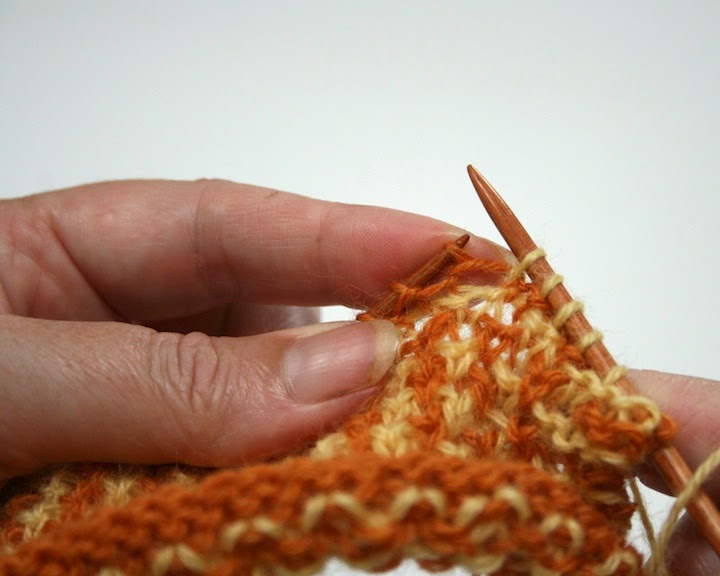 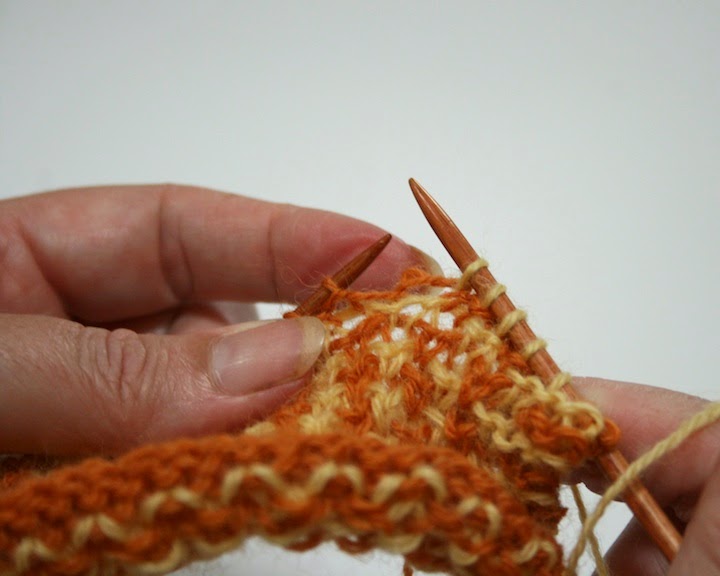 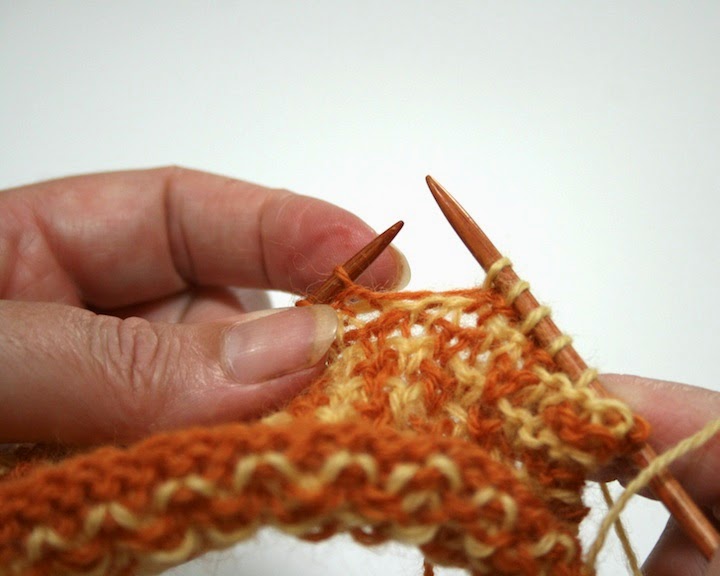 Step 4: Knit the next stitch. 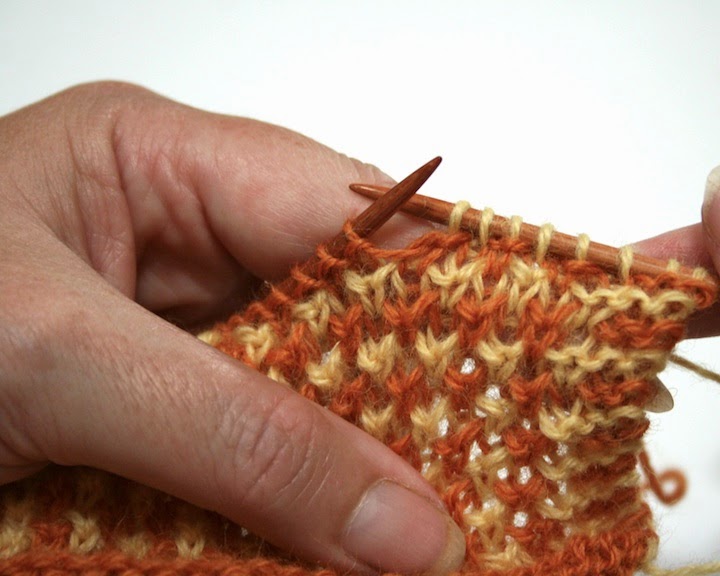 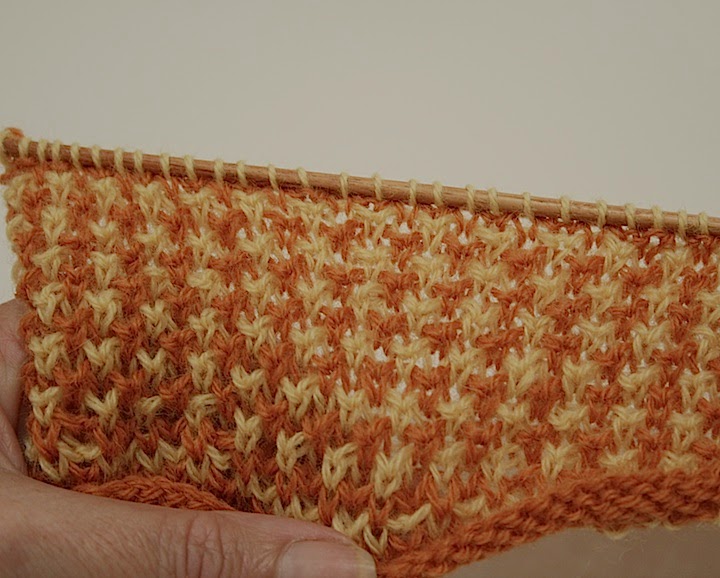 All other instructions within the pattern remain exactly as specified. The only change is the stitch as described above. The set up row can also be left as in the book.

If however, you would like to try knitting the jumper using the stitch pattern as in the original pattern you need to follow the 4 row pattern as described. However in order for the very first row of the pattern to work you need to finish the stocking stitch pattern worked first on a right side row and then work a row of knit stitches from the wrong side of the work providing you with a purl ridge to work into. Once you have done that the pattern makes sense. Let me show you how to carry out the action ‘knit into loop only below next st and drop st off needle’. 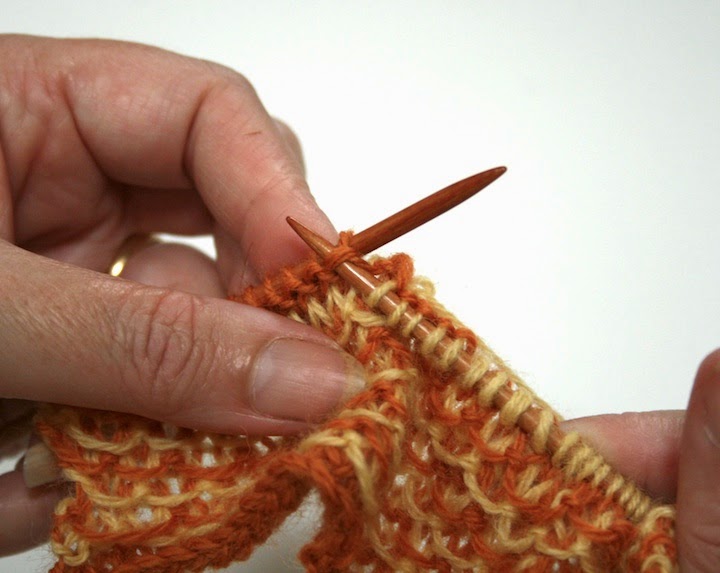 Step 1: Insert tip of right hand needle into the front loop (the purl ridge) of the next stitch on the left hand needle 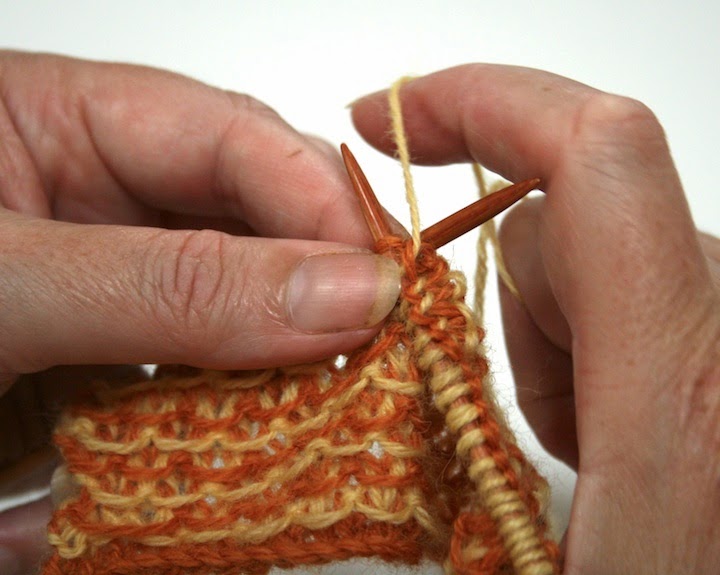 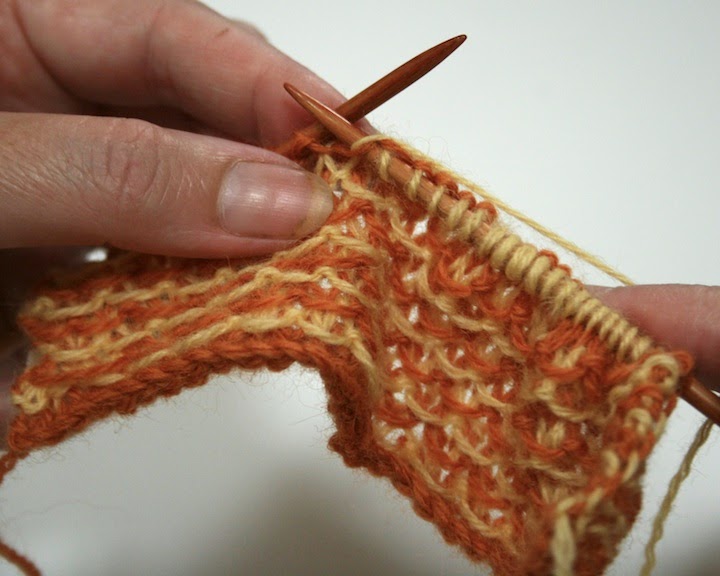 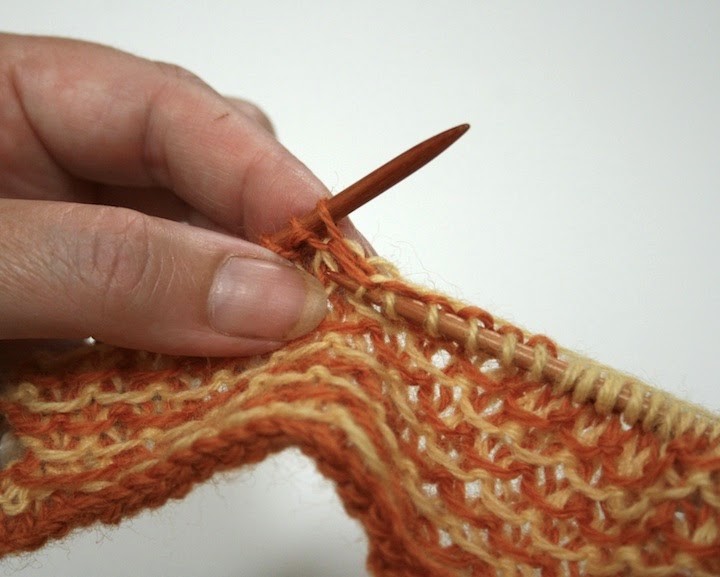 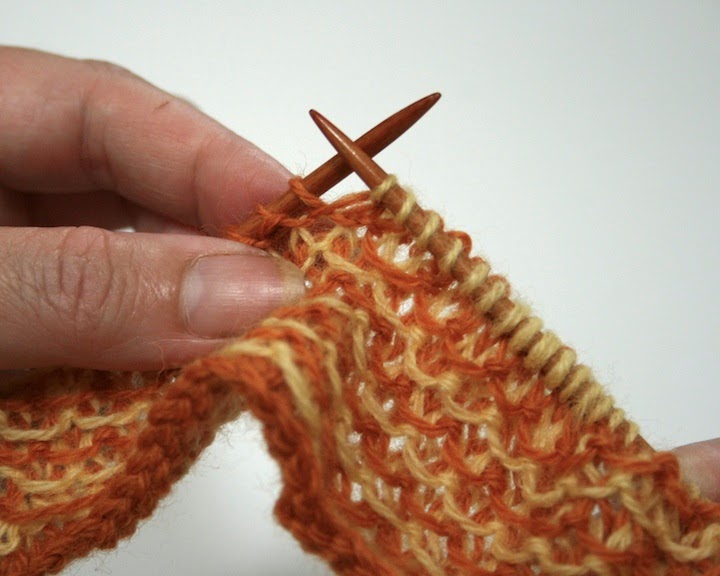 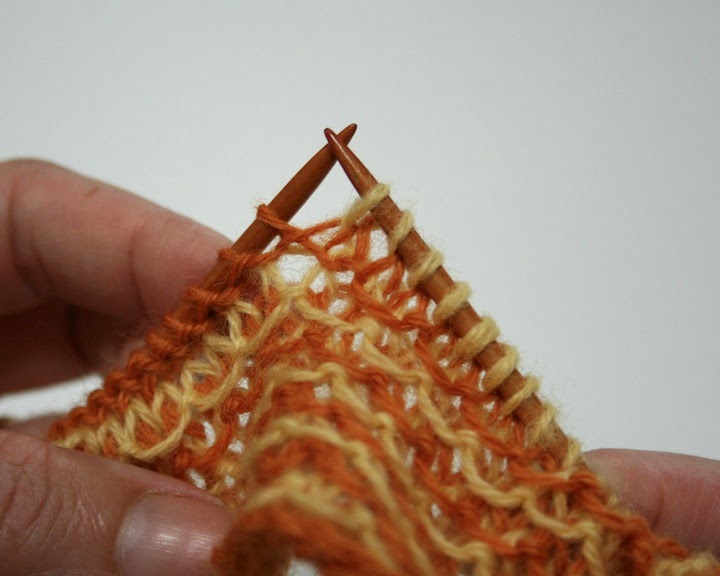 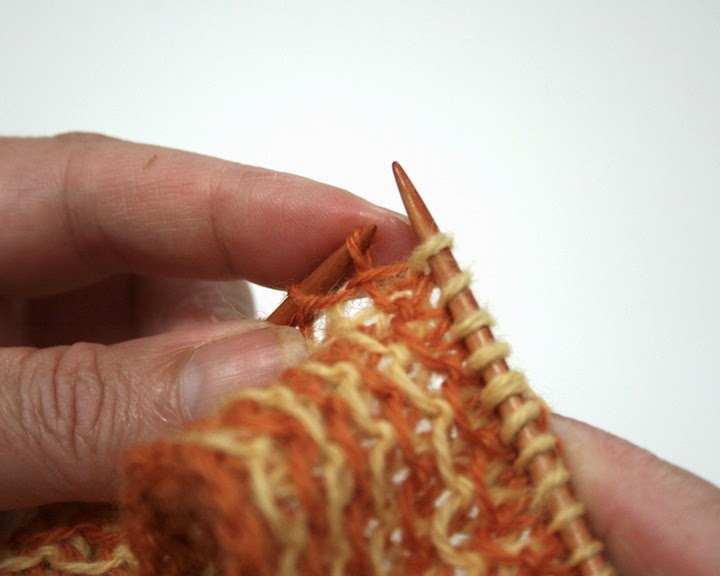 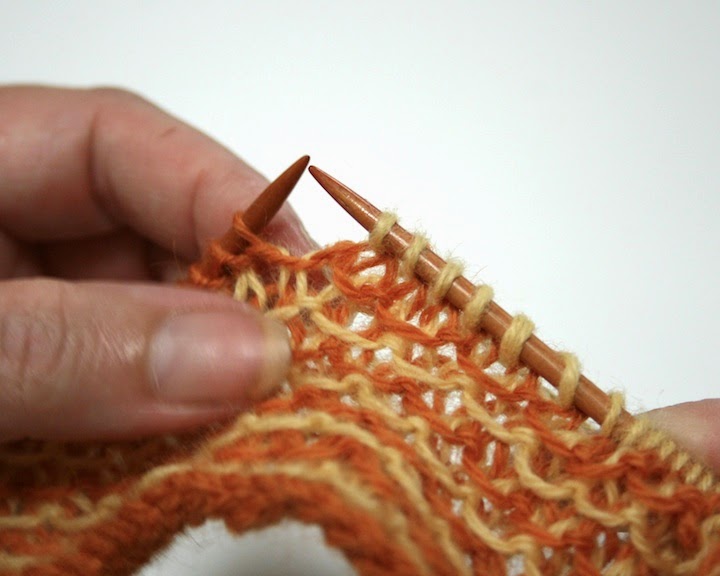 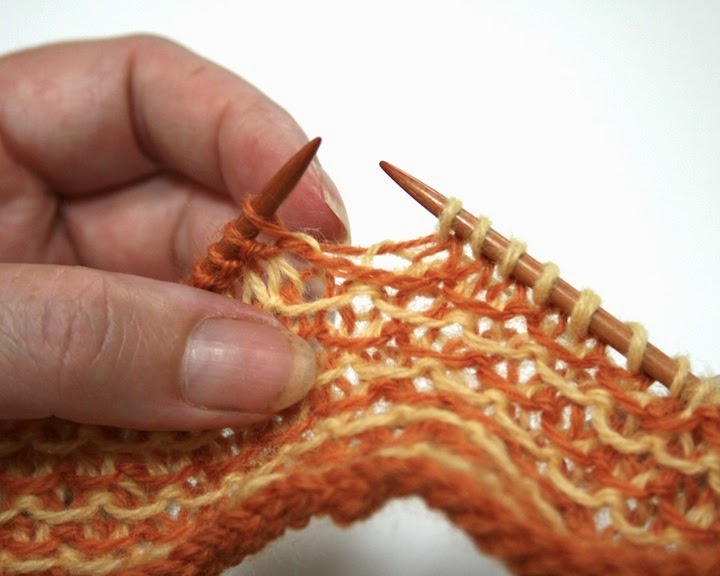 Step 4: This creates a loop lying across the front of the work 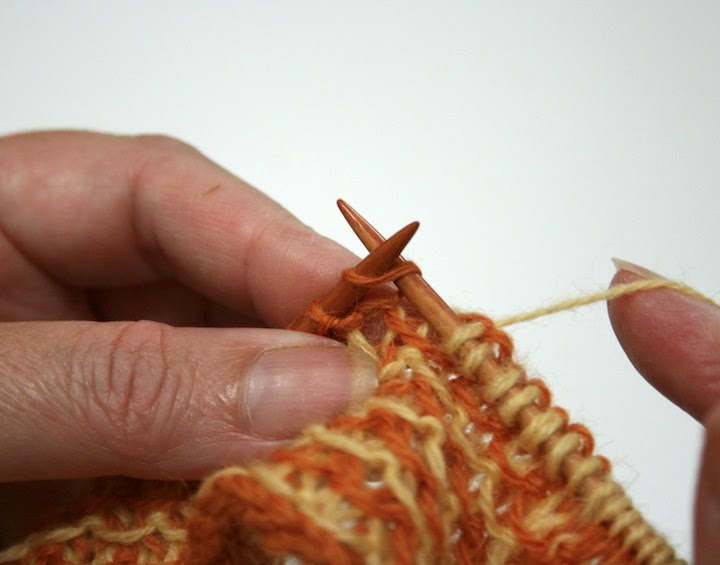 Step 5: Knit the next stitch. This secures the loop at the front of the work 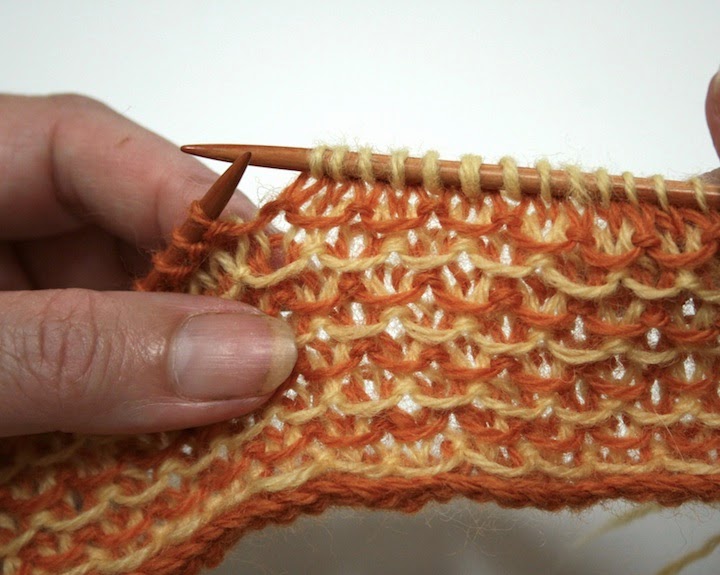 And there you have it. Two very different looking patterns created simply by working one stitch slightly differently on the two patterns. If you have the pattern you can now choose which stitch pattern you would prefer to knit. I’m rather tempted to knit myself the original version so that I can see how it looks compares to the new version.

but for now,
Susan xx