As I began to plan this post, it dawned on me very quickly, that there would have to be more than one post dealing with the mystery that is blocking, as varying types of projects and differing yarns require handling differently.

‘Blocking’ instructions are usually found within the making up or finishing instructions in a pattern. Blocking has become a catch all expression which refers to how to finish or ‘dress’ your almost completed project. How to bring out the best from your chosen yarn, how to ensure the correct shape and fit to your project and how to have the desired finish to the surface of your fabric.

As a dressmaker, one of the first things I do when preparing to sew, is to open the ironing board, get the iron out and fill it with water to ensure plenty of steam. Alongside this I usually have a water sprayer and a fine, damp, muslin cloth to protect the fabric. No woven item would ever be produced without the use of some heat or pressure. And yet, when I first began to knit garments, I didn’t initially make this connection and wrongly assumed that once a knitted project was sewn up that was the end of that. Maybe I have some excuse. When I first became ‘pattern aware’ as a teenage knitter, instructions on how to approach what is now called blocking were scanty to say the least.

Examining a book today from the late 1980s which became a firm favourite, the “Elle” knitting book, there are absolutely no blocking or dressing instructions included. Once the garment was sewn up, it was ready to go. And yet, quite obviously just from the cover image below, some form of pressing or blocking must have taken place on the samples produced for the book. 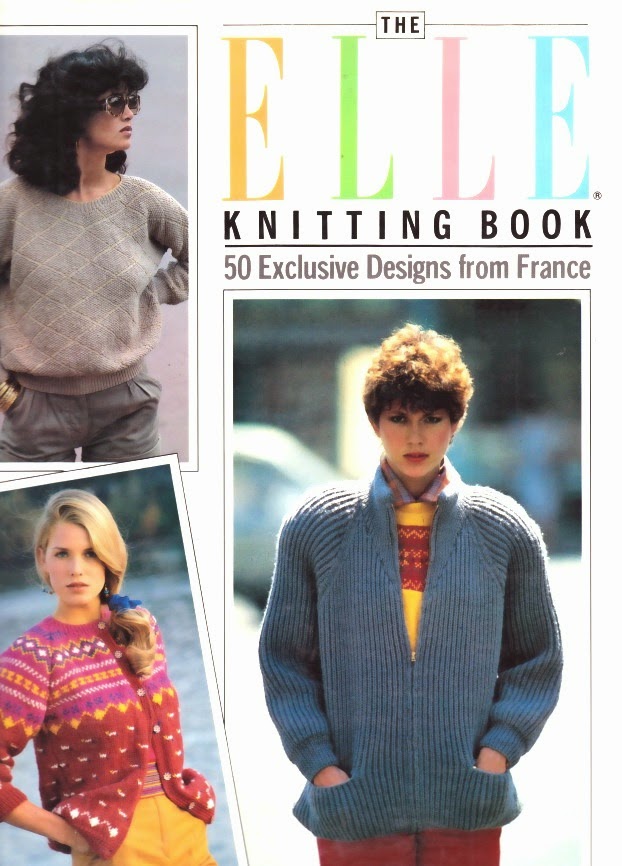 Interestingly in a number of Margaret Murray and Jane Koster books from the 1930s and 40s, they do tell the knitter to press the pieces using a warm iron, usually on the wrong side and to avoid ribbing, prior to sewing up. 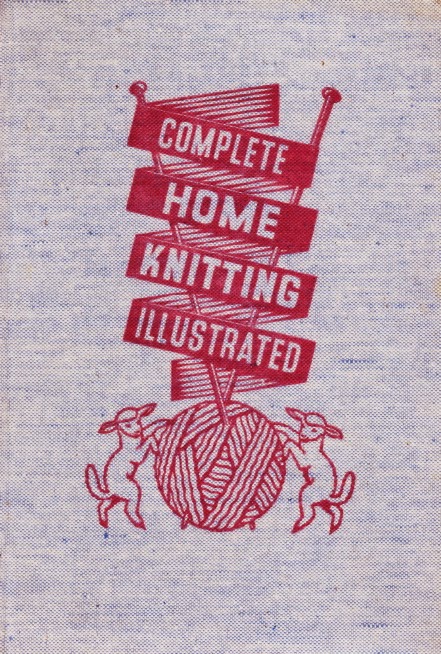 I can find no evidence however of the full process of blocking, including soaking, being recommended to the knitter. This is, of course, all taken from a UK point of view although  I have many Vogue Knitting magazines from the US and Sandra magazines from Germany, neither of which make very much reference to these final steps. It would be really interesting to hear what sort of instruction patterns from the 1930s to the 1990s provided elsewhere.

My assumption is, that this is because it was assumed that knitting would always be washed once it was completed. Coal fires, cigarette smoke and an often, smoggy atmosphere would mean that most knitting would get dirty during the knitting process and would automatically mean it would be washed. Likewise drying flat and patting out to shape was an every day occurrence when natural fibres were always used.

And I think that is probably the key here. With the overwhelming popularity of synthetic yarns in the 1970s and 1980s the ability to use heat and/or warm water and pins to create a permanent shape was forgotten about by many. Coupled with that, patterns assumed a knowledge from the knitter that wasn’t always there. I may be wrong with this generalization. It might in fact, have been more of a disconnection between the washing of the garment being anything more than a need to clean the item once it was produced and the idea that this process could be used to aid the finished appearance or the sizing of the piece. Either way, many of us, including myself, grew up and learnt to knit without these links and lessons being taught or learnt until fairly recently.

I hasten to add I always washed my knitting after completion – unless I was wearing it for a night out whilst still sewing on the buttons on the train! I also, always pressed the usually individual pieces prior to sewing up. I too have fallen into the trap of assuming everyone else already knew what to do but over the years as I’ve talked to many, many knitters, I have come to realise that actually lots of knitters are completely baffled by the term, blocking, and what they are supposed to do.

So first of all, lets not worry about a word. Blocking, dressing, or finishing are umbrella terms which are telling you that you need to take further action with your knitting before it is complete. As I have already said, different projects, yarns, stitches require different approaches so I’m going to focus on today on a particular project and explain how I would approach the blocking/finishing of it.

These mittens are knitted in 100% wool – in this instance Excelana 4ply – but most wools behave and respond similarly and they are knitted using stranded knitting, or Fair Isle, technique. Usually when working a piece of stranded knitting there will always be some irregularity in the surface of the work and until the piece is finished it will never look quite right. Pretty much everything we would do with these mittens we would also do with a stranded garment.

These mittens are based on a traditional scandinavian pattern which I found in Annemor Sundbo’s wonderful book,  Norwegian Mittens and Gloves, which I have then adapted – knitted using Cornflower Blue and Alabaster Excelana 4 ply.

I usually soak the knitting in luke warm, soapy water for about 20 minutes. Use a laundry liquid specifically for wool. 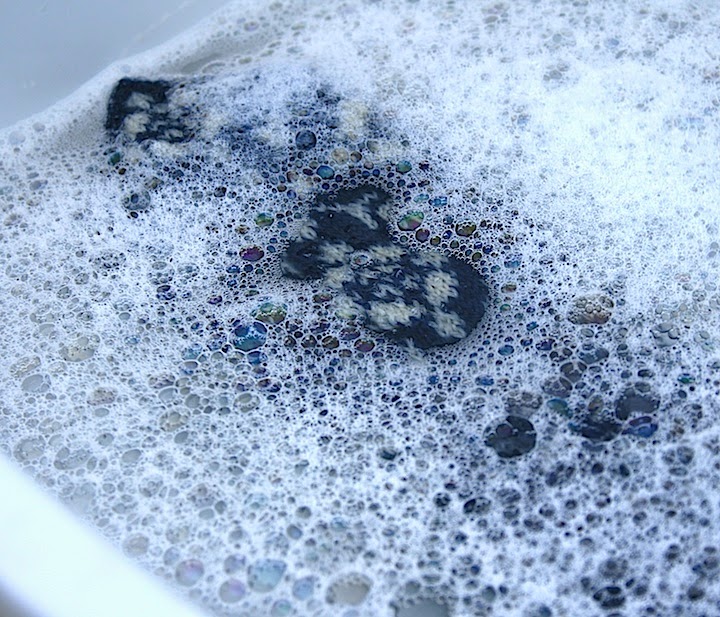 I always use Navia Wool Care hand wash which is an organic hand wash (perfect for those of us on a septic tank) that contains organic lanolin which in turn feeds the wool as it is washed. It does require rinsing out afterwards but that really doesn’t worry me. 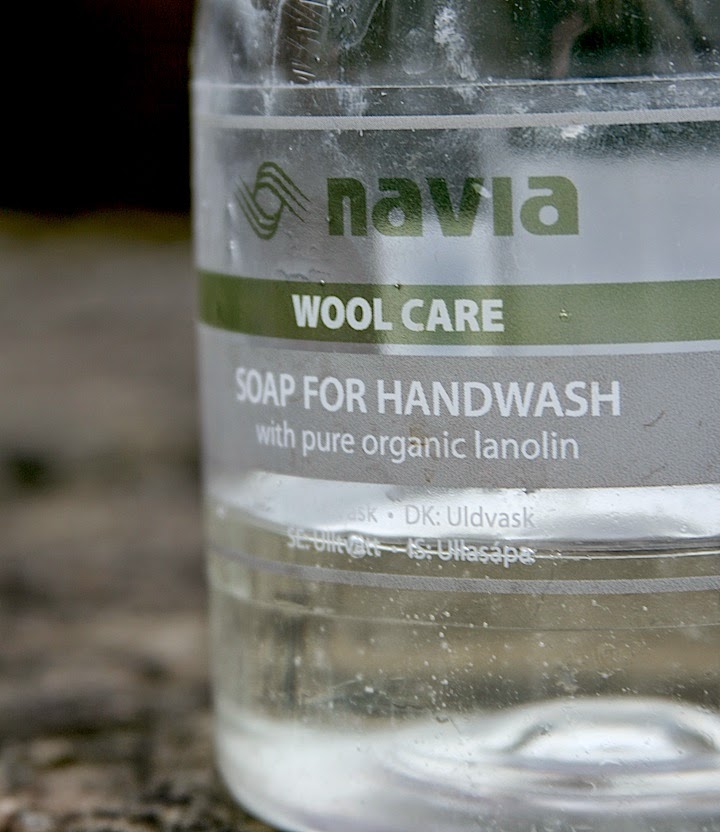 It also only has the slightest scent of Juniper but otherwise lets the natural wool scent dominate. This is obviously a personal choice, but I’m not a one for perfume smells on my knits so this works perfectly for me.  The wool wash is available either from Island Wool’s online shop or I also have it available to purchase when I am at events. At some point I will get it added to my online shop too, but in the meantime, I would highly recommend the lovely folks at Island Wool.

During the soaking the wool will begin to ‘bloom’. The wool absorbs the water and each stitch fills out, plumping up, filling in the irregularites and most importantly with stranded knitting, attaches itself more firmly to the stitches on either side of it.

Once you have allowed the knitting to soak, rinse thoroughly then roll your knitting in a towel and firmly yet carefully extract the excess water from the wool.

Remove the knitting from the towel. Mittens require careful shaping to get the best results and the way to this is with a mitten stretcher (blocker). These are traditionally made of wood and come in a whole range of sizes. If like me, you are often knitting mittens in a variety of sizes being able to rustle up your own blocker is a really useful thing.

Get yourself a firm piece of cardboard larger than your hand, a pen or pencil, scissors, a tape measure and some sellotape.

Measure around your hand at its widest point above your thumb. Divide this by two to give you the width needed for your mitten stretcher. 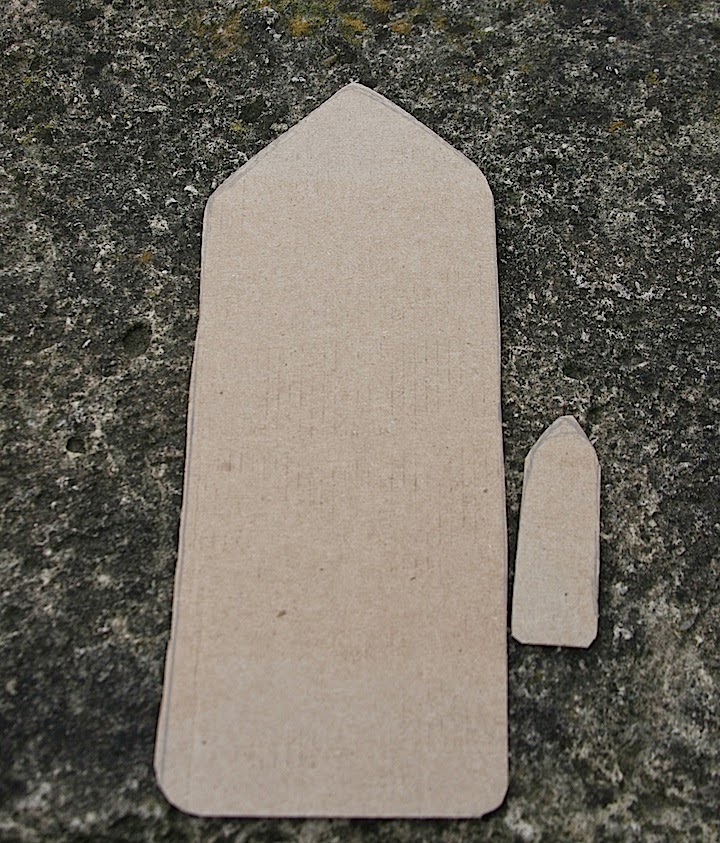 On your cardboard, draw two rectangles about 30cm tall and your required width. Draw a curved shape at the top as similar as possible to the desired final shape of your mitten, then round off the bottom corners to prevent snagging, and cut around your outline. Now for the fun bit. Cover your cardboard stretchers completely in sellotape. This makes them water resistant. The final step is to make a further two small rectangles the size of your thumbs in the same way. 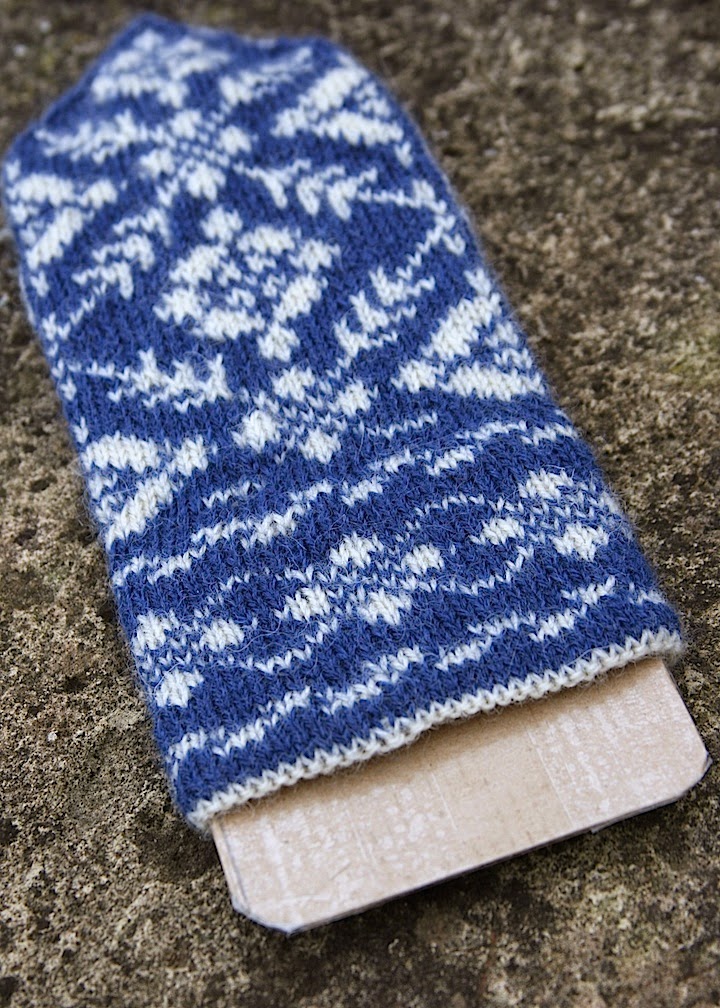 Insert the larger stretcher into the mitt, ensuring the side seams of the mitts line up with the side edges of the cardboard and that the mitt is stretched evenly across the cardboard. 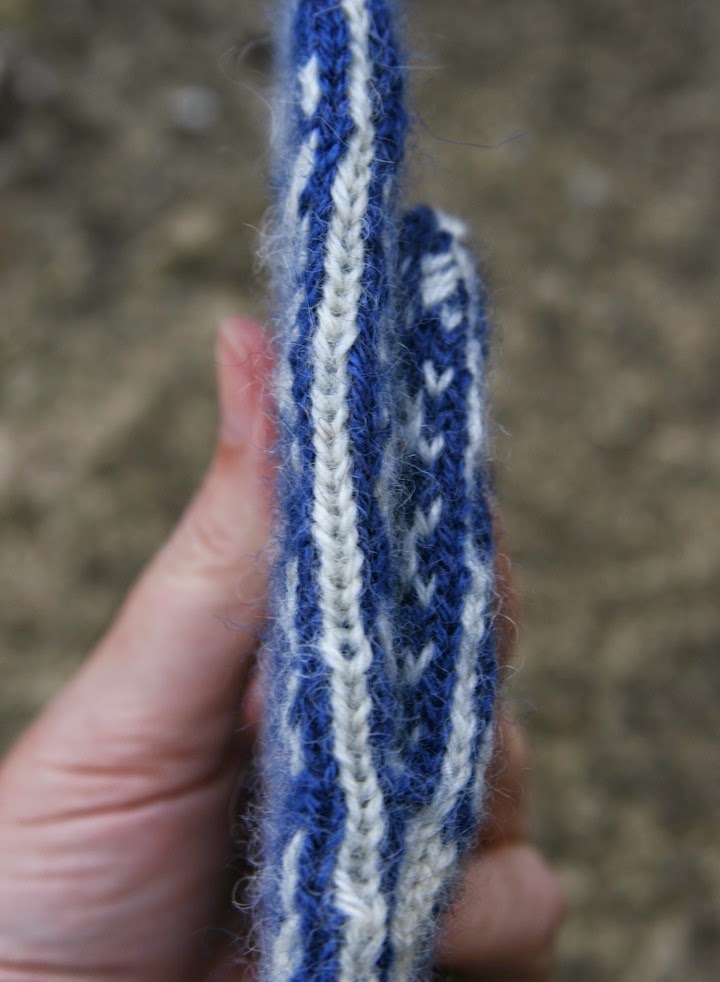 Insert a thumb stretcher into each of the knitted thumbs. Place on a rack or maiden to dry flat.

Once the mittens are completed dry remove the stretchers and hey presto, you have a beautifully smooth fair isle fabric and a perfectly shaped mitten. If you wish you could also apply some steam with the iron if necessary.

I would recommend that only at this point do you do the final darning in of any remaining ends.

And there you go, that’s all there is to it. And is it worth doing? Absolutely. There is no comparison between a mitten that has been blocked, dressed, finished and one that hasn’t. Its definitely worth taking just a little extra time to end up with such a professional and beautiful finished object. I’ll be back on the subject of blocking in a couple of weeks, when we’ll look at finishing a fair isle garment.

If you are interested in the mitt pattern, you can purchase Annemor’s book from online book retailers or I will also have an updated version of this classic available on my website in the next couple of weeks.